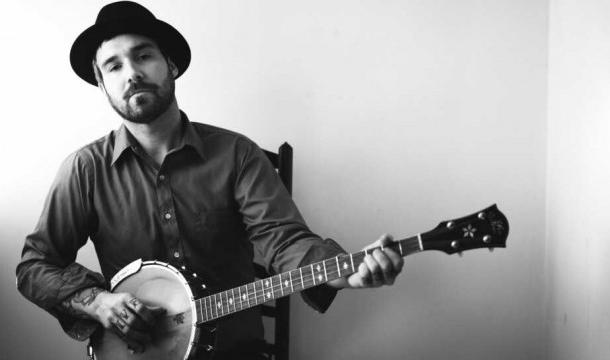 So you've likely seen this little meme game running around Twitter and other social media. You post it, and advance through the list for each "like." It's a fun little curiosity for everybody, plus you get to fish for some 25 karma points, which will doubtless make you a hot property. 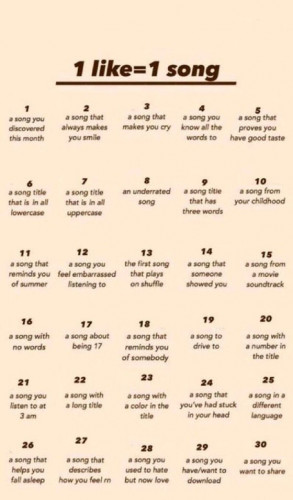 Well, what is we throw away the social media rules and I just straight list my song picks? As we say around here, "Any excuse for a playlist!" No, really, any excuse! Let's get going:

[1] A song you discovered this month

That would be Merle Travis' "So Round, So Firm, So Fully Packed," which I stumbled upon while researching the songs about coal mining. Travis was behind the Southern Gothic classic "Sixteen Tons," and as I mention in that post, seems to have faded from the limelight in recent decades.

[2] A song that always makes you smile

I don't know if my face's expressive range could even be said to be capable of smiling. I'll give it a try though. I just try not to scare children in public, you know? But for a happy song, Matthew Wilder's "Break My Stride" is as good a contender as any. This is mostly due to being a perennial favorite of both myself and my spouse of 29 years (aaaaand counting!). When it comes on, we both drop whatever we're doing and dance around to it while our kids make sarcastic gagging noises, which just adds to the fun!

Once again, human emotion is beyond my rusty emulation circuits. But one of the songs that brings me closest to tears is John Lennon's "Imagine." Yes, that is corny, but he's still right. It's basically the answer to "why are people so broken?"

Boy, where to start? I mean, I work here, you know? Out of the zillions of songs I know by heart, I'll pick Frank Zappa's "Let's Make the Water Turn Black." If this song comes on, I am at least mouthing the lyrics along, even if I'm in a coma. It's a reflex, I don't even know I'm doing it.

[5] A song that proves you have good taste

Great. A philosophical speed bump, just when we were doing so well. I'm going to arbitrarily pick The Dresden Dolls' "Coin Operated Boy" as a cultured example of punk cabaret. Listen, I'm a John Waters fan; don't push me on this taste issue.

[6] A song title that is in all lowercase

Who collects songs this way? Who organizes songs by typeset? What other trivial category do you want, song titles without the letter 'e'? Songs with an apostrophe in the title? Songs that are a prime number of seconds long? Billie Eilish "8."

[7] A song title that is in all uppercase

Well naturally, we have to be fair to both sides, right? This time I have a strategy. Black Sabbath and Ozzy Osbourne had a penchant for song titles that were cryptic acronyms. I'll pick Black Sabbath's "N.I.B." because it fits the template and also happens to kick ass.

We're back to "title trivia," huh? Whomever put this list together had a parched imagination. Slipknot's "Wait and Bleed."

[10] A song from your childhood

You don't want to know, because I am Generation X. We were born in stale Baby Boomer Music Hell and had to claw our way out to the 80s. My earliest memories are just endless disco. I'll pick "Disco Duck" by Rick Dees and His Cast of Idiots, as a prime example of the hell I had to suffer through in the '70s. Seriously, 7 years old is too young to wander around asking "What the F*** happened to music?"

[11] A song that reminds you of summer

Lots of obvious hits I could list here, but Alice Cooper's "School's Out" is at least a sensible answer.

[12] A song you feel embarrassed listening to

Now we're in my neighborhood, because I collect weird stuff. I summon Raffi's "Bananaphone" as a song I'm embarrassed to even admit knowing exists.

[13] The first song that plays on shuffle

And the random winner from my main playlist ISSSSS… "Take the Skinheads Bowling" by Camper Van Beethoven.

[14] A song that someone showed you

I was at some party with a bunch of 80s mall rats, somebody put "Angel City" on their boombox, and that was my first introduction to Motorhead. I had heard about them many a time, seen the Tshirts, but since Motorhead was rarely played on the radio, the band's popularity had to spread by word of mouth.

[15] A song from a movie soundtrack

I'll go with Angelo Badalamenti's "Red Bats With Teeth" from the Lost Highway soundtrack. Not only is this the best soundtrack from a David Lynch movie, but this song is even used with some slight plot relevance. Early on, this song is purported as Fred's saxophone music while he's playing at a club. Later, after he has transformed into Pete the mechanic, the same song plays from a radio in his garage, which annoys him so that he has to change the station (perhaps it reminds him of his troubled past?). He even gets briefly confronted by another mechanic (a Jack Nance cameo) who meekly protests "I liked that" before letting the matter slide.

Duuuuh, do you mean "instrumental"? Oh, wait, let's think originally here… " Prisencolinensinainciusol" by Adriano Celentano. It is viral-famous on the Internet for being composed of English-sounding (really, Esperanto-sounding) noises, none of which are technically "words."

[18] A song that reminds you of somebody

Since I just did a list of songs about celebrities last week, I'll recycle Weird Al Yankovic's "Stuck In a Closet With Vanna White." Oddly enough, it always reminds me of Pat Sajak, standing on the Wheel of Fortune stage checking his watch, wondering where Vanna White is.

I never pass up a chance to recommend Suburban Lawns' "Flying Saucer Safari" as the perfect road-trip starter.

I already burned "8" back there rebelling against the lower-case-song-title answer, so now I have to fall back on the Beatles' "One After 909."

A query which is impossible for me to answer honestly. I am one of those disturbing "morning people" who is more likely to be taking my first coffee at 5AM. If I'm up at 3AM, I'm usually not playing music. But I suppose if you want something weird to listen to at 3AM, "Help I'm a Rock!" off Frank Zappa and the Mothers of Invention's Freak Out album fits as well as anything.

Pink Floyd's "Several Species of Small Furry Animals Gathered Together in a Cave and Grooving With a Pict" leaps instantly to mind.

I'm over it now, but for a while the Mighty Mighty Bosstones' "The Impression That I Get" had me randomly roaring "NEVER had to knock on WOOD…" at odd hours.

[25] A song in a different language

Hey, every language is different! OK, you mean "not in your mother tongue," and perhaps I should limit this to songs actually in my playlist. So I'll pick "Les Champs-Elysees" by Joe Dassin. I actually went through a little French Pop phase once upon a time, despite not speaking a word of French.

[26] A song that helps you fall asleep

This is another faulty answer, because music doesn't help me fall asleep. Music wakes me up. But if you want the sleepiest song I can think of, you have to go classical with something monotonous like Ravel's Boléro. It comes to mind only because I recently saw Allegro non Troppo after finally tracking it down, which sets this music to an animated sequence of evolving goo proceeding from decaying Coca-Cola to a monkey glowering over his skyscraper city.

[27] A song that describes how you feel right now

That's a tough one! Usually it's the other way around, I like a song when I first hear it but then everybody plays it to death until I start hating it. I'll have to go with something like "Self Esteem" by The Offspring, a band which I at first dismissed as too derivative of punk-pop that had gone before, but which I eventually warmed to as having talent in their own right.

Free parking, huh? I'll say "Drop It Like It's Hot" because I like Snoop Dogg (not to mention Pharrell Williams) without actually being motivated to obtain tracks for my collection.

I know I've beaten this one to death around here, but "The Old Devils" by William Elliott Whitmore. He's a native to my home stomp of Iowa, and this song sounds like an Old testament prophet singing a blues song warning you that Putin is going to invade Ukraine. Good Southern Gothic Blues should sound like the sinners must repent now, for the hour is at hand. Play it while youread the mornign newsfeeds.

Maybe this wasn't such a good idea for a drive-by blog post anyway.