Have A Ball With The Who's Tommy 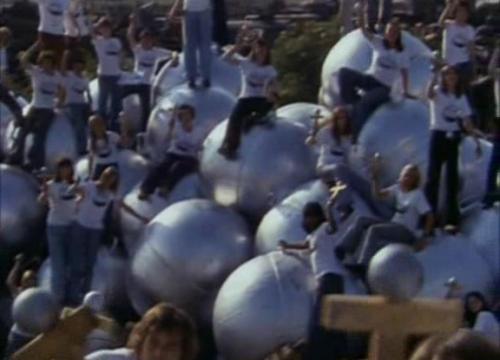 It is the most iconic rock opera ever made, the first example named whenever anyone thinks of rock operas. It is also The Who's most outstanding achievement; while they could and would top this work in later years, Tommy is still the benchmark against which all their later works are compared. We already murmured about Tommy last year on the event of director Ken Russel's passing, but we promised ourselves that we would give Tommy its due. Tommy also got very lucky in escaping the fate of Sgt. Pepper's Lonely Hearts Club Band (the movie, not the album or song), which also had an all-star cast and high production values and in fact shared a producer with Tommy, namely Robert Stigwood. How's that for dodging a bullet? Since Stigwood and Ken Russel produced Tommy together in 1975, and then Stigwood went solo to produce the train wreck Sgt. Pepper's, we know who the Garfunkel of that team was, don't we? And oh, what a cast! It's a shame to name names here, because some of the supporting roles are such a delightful surprise when they pop up. Jack Nicholson is in this! OK, he really can't sing well, and his role isn't really much more than a plot device, but still, The Joker! And then there's Tine Turner, who steals the show and runs for the hills with it in her role as the Acid Queen, finishing up her song with an echoing witchy laugh that is guaranteed to send shivers down your spine. And yes, that is Eric Clapton in a Jesus-freak getup strolling down the aisle in church - who else would it be? Heck, Elton John is in this and you almost forget about him, even though his part is one of the centerpieces of the film. Now, you will find some spoilsport critics out there who say derogatory things about this film. That it is too bombastic, too over-the-top, that it is an indulgent orgy of excess. We think those critics are wet blankets. With a work this epic, sometimes it's best to either go big or go home. In this film, everybody from the top star to the lowest extra breaks their back to give 110% effort in entertaining the daylights out of you, and as a result, we're still raving about it 35 years later. Even Oliver Reed, in his heavy duty as one of the leads, manages to at least do a decent job of singing and is given material that just about matches his skill. Ann-Margaret, of course, throws herself into it with the ferocity of a tigress. Or... like a "kitten with balls" as Cameron Diaz describes her in 1996's Feeling Minnesota. We might as well sketch the plot: Tommy is a boy who is born as the son of a Royal Air Force Captain. Shortly afterwards, his dad gets shot down over the battlefield and is presumed dead. His mom later re-marries Frank, who takes Tommy on as a benevolent step-dad, but trouble looms when Captain Walker, his missing dad, suddenly returns home and startles the whole family. Frank accidentally kills Walker, and the horrified mother and step-father get all up in Tommy's face telling him that he didn't see it or hear it, and he'll never tell anyone about it. Tommy's reaction is to get a little brainwashed by the incident, staying in shock throughout his childhood as he becomes blind, deaf, and mute. His mom and step-dad then try to cure this and give him a reasonably happy childhood anyway. To tell more would be to spoil the plot, if that's possible, but suffice it to say that we're going to wade through swamps of both Freudian and religious symbolism before we get to the end of Tommy's story. We're also going to have our minds blown with some extremely trippy scenes, and our wits sharpened by some extremely wicked social and religious satire. After all, this is a Ken Russel movie. But it bears rewatching, so you can appreciate such clever props as that combination streetcar, organ, and cash-register and the working of the pinball and the letter "T" into a cross shape, giving the story its iconic logo. Unlike many rock operas, the plot is very-well structured and told. New songs were written specifically for this film, which helps a lot, as opposed to the album, where it's a lot harder to piece together the story at its heart. The crazed imagery and hyper atmosphere nevertheless serves to illustrate the story... for the most part. You don't get lost often, although you might have to mull over some scenes a tad. All in all, Tommy is not an easily forgotten experience. It is at least one movie that helps to save the rock opera from the fate of disco.