Excuse Us For Saying So, But the Star Spangled Banner SUCKS 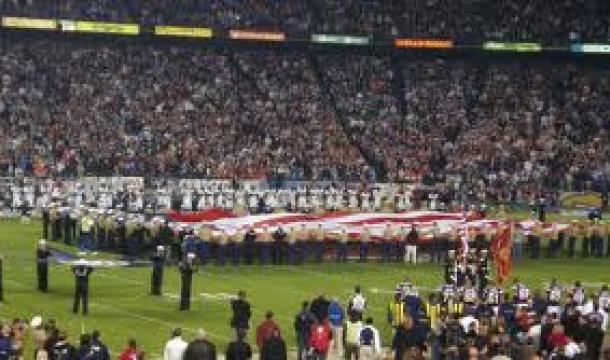 Have you ever heard of another nation at odds with its own national anthem as much as the US is with "The Star Spangled Banner"? Do Canadian hockey games provoke front-page scandals with "O Canada"? Do Brits have half the crowd at rugby matches falling out of key with "God Save The Queen"? Do the Australians have to go around defending "Advance Australia Fair"? No, none of this happens. Every other country has a nice, safe, singable anthem and the United States' anthem makes trouble everywhere it goes.

Here we have yet another July 4th, Independence Day, and in the middle of our fireworks and barbecues we will have yet again to struggle with warbling this sinking battleship of an anthem that nobody likes. Well, Americans, what are we going to do about it?

Because we have yet another scandal over a pop star singing it "wrong": Lady Gaga is going to be turned over a knee and spanked (and we don't mean the good way) for playfully changing a line. Harrumphs Rep. Allen West: "This young lady should be taken to Ft. McHenry and given a history lesson as to why Francis Scott Key wrote those incredible words."

Oh, PUH-lease! Those "incredible words" amount to "we drink our enemies' blood and our dogs chew their bones!" The entire anthem is about a rather insignificant battle in US history, the Battle of Baltimore, which was actually an event from the War of 1812 and not the American Revolutionary War. There, see the first problem we have here? Most of you just learned that fact and will probably forget it in five minutes.

Just look at some excerpts of these lyrics from the latter verses- which nobody dares wade into: "Where the foe's haughty host in dread silence reposes." Edgar Allen Poe story or national anthem? "As it fitfully blows, half conceals, half discloses." Summer school called, it wants its D- English paper back. "Their blood has washed out their foul footsteps' pollution." And we give Ozzy grief for "Suicide Solution."

Oh, and the tune came from an English drinking song. If you slammed your cat's tail in the piano, the resulting noise of said cat would be more melodious and probably easier to sing.

And if you think we're the only site that has a problem with "The Star Spangled Banner":

Most Americans seem to act like a national anthem is set out at the same time as the constitution and changing it later amounts to an act of treason. Well, "The Star Spangled Banner" didn't even get adopted in any official capacity until 1889,when it was designated as the theme song to raising the flag at military functions. It didn't get finalized as our national anthem until Herbert Hoover signed such into law at last on March 3rd, 1931 - over a century and a half into our nation's history!

Now, we have alternatives. There's "America The Beautiful", which has been advocated as a replacement national anthem by no less than Ray Charles himself.

Bonus strengths of "America The Beautiful":

Why is this even a debate?