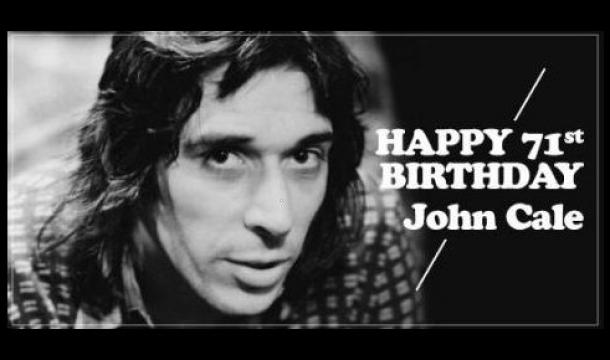 In our last episode, we corrected what we saw as the great imbalance of attention paid to the two most famous members of the original band The Velvet Underground: We're giving John Cale his rightful due and catching him up to Lou Reed as an innovator and influence of music enduring from that time to today. Let's continue our career safari.

Source books include: Love Goes to Buildings on Fire: Five Years in New York That Changed Music Forever by Will Hermes and The Velvet Underground: An Illustrated History of a Walk on the Wild Side by Jim DeRogatis, both excellent reads for Velvet-heads.

#6 John Cale was partly responsible for an early dance-craze parody song "The Ostrich."

Cale's name, predictably, gets left off both the record label and the YouTube credit, but he was part of the early gag-novelty band The Primitives, a group hastily assembled to promote the single which Lou Reed had dashed off. Reed (who always seemed to draw inspiration from something he read, see title of band) read an article about how ostrich feathers were supposed to be a new fashion craze and made up a dance and hit single on the spot. Then John Cale, Tony Conrad, and Walter DeMaria were united under the Pickwick record label to go promote the single at live performances. It didn't take off as predicted, but it cemented Reed and Cale as a creative team and launched their combined exploration of just how much they could mess with their audience's heads - literally, as the Ostrich instructs you to put your head between your legs.

Fun side trivia: Primitive Tony Conrad was also a Harvard graduate in Mathematics and designed dazzle camouflage painting patterns for the US Navy. Weapons-grade pop art!

#7 Worked with Brian Eno in producing Wrong Way Up.

Wrong Way Up was an album released in 1990 which was a collaboration between John Cale and Brian Eno. It's almost indefinable, but falls between synthpop, new wave, and prog-rock, kind of like a more upbeat Depeche Mode. Here's one of the more prominent tracks, "Been There, Done That ":

The name Brian Eno should itself be familiar to you, even if his name has never graced a Top-40 chart. He's the ground-breaking studio producer who has worked in conjunction with Depeche Mode, Coldplay, Laurie Anderson, David Byrne, Devo, and just about the who's who of New York new wave. Eno is another name, we vow, which will have its day within our pages.

#8 Made the eeriest cover of "Heartbreak Hotel" ever.

Hey, Elvis fans, paste your eardrums on this haunting cover of Elvis' "Heartbreak Hotel" and see if it doesn't shake the sequins off you:

Yeah, that wasn't Marilyn Manson, that was John Cale in 1975 from the album Slow Dazzle, which you now must hunt down and play obsessively until your brains turn to Halloween candy corn.

And Patti Smith asked for him by name. Horses is an album that casts a long shadow in rock history, often celebrated as one of the greatest punk albums ever and lauded by Rolling Stone, NME, and Spin.

Not so remarkable on its own - but he's in his LA studio with Danger Mouse and his daughter Eden Cale. Here's a track from that:

Hey, he's currently age 71 as of this writing, and this album just hit the shelves (and digital download) last year. That's the astounding part!

What can we take away from all this? John Cale was sort of a spiritual godfather to punk and new wave, and central to the exploding New York art and music scene of the 1970s. That time and place was such a laboratory of music innovation, birthing so many great bands in the legendary CBGB's club that still influence what we all listen to today, that it seems almost supernatural, as if ancient Greek muses and pixies descended on the area to deliberately kick the hippies out of culture and save mankind from disco.

And Cale was eons ahead of his time. As you can see from exploring his career, he was making music in the '70s that most people just discovered in the past two decades. Lou Reed is certainly worth lauding, too, but come on, what does John Cale have to do to get some credit around here?