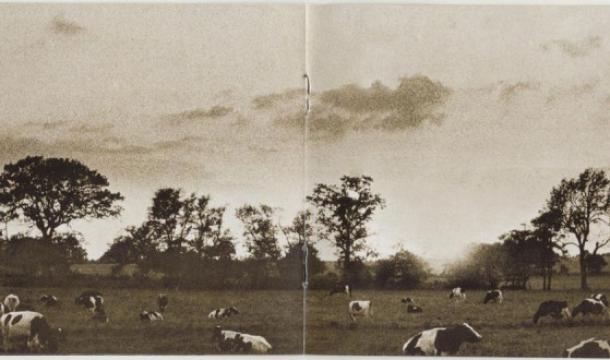 I have always loved Pink Floyd's Atom Heart Mother. It doesn't make my top-10 or anything, but I consider it a solid entry in the Pink Floyd canon at the time, "at the time" being Pink Floyd's earlier output (1965-1972, handily covered in the box set The Early Years). This is also the era of Pink Floyd when I considered them to be an alternative jam-band / stoner-rock choice if you're tired of Grateful Dead but you're also not in a Deep Purple mood. 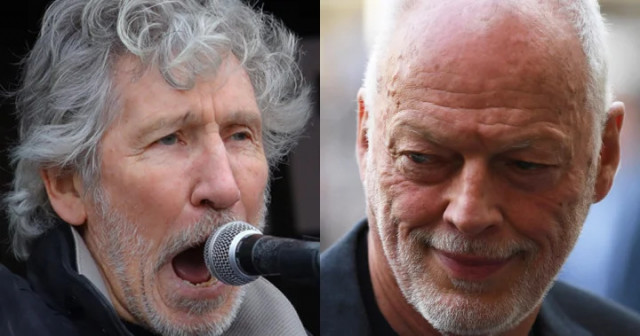 Pink Floyd Hates Their Own Album

My benevolence towards Atom Heart Mother seems to run contrary to most fans' opinion and even to the artist themselves. Despite the fact that the album was commercially successful at the time, both Roger Waters and David Gilmour have run it down ever since. Gilmour in an interview:

> "...the long piece "Atom Heart Mother." That was a good idea but it was dreadful. I listened to that album recently: God, it's shit, possibly our lowest point artistically. "Atom Heart Mother" sounds like we didn’t have any idea between us, but we became much more prolific after it."

Meanwhile, even with Waters stating to the effect that he wouldn't perform the title track from this album for a million pounds cold, David Gilmour still took to the stage and performed the suite again in 2008. So he's willing to shrug and play it again, while denying all the time that he understands what all the fuss is about.

Here's the thing: Pink Floyd gets a bad rap for being pretentious and pseudo-intellectual. And even Gilmour's criticism seems to sympathize. The usual rabble aimed at prog-rock bands the world over. If they could only see the heights of insufferable pretentiousness yet to come in music culture in the 2000s, boy howdy!

Yet I don't see the insufferable part. I see Pink Floyd as earnestly trying to experiment with music and explore new frontiers, exactly like Gilmour says they were doing. And look what that experimentation yielded a couple albums later: Dark Side of the Moon, and all that came after. Isn't it worth sitting through some larval-stage musical puttering if you end up with the grand butterfly that was Pink Floyd's Dark-Side-to-Wall phase?

You can also see that the members of Pink Floyd were, in fact, not taking themselves all that seriously at all. 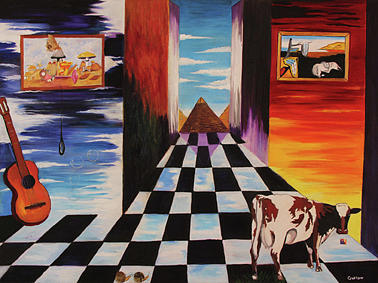 The Cow Gives It Away

The cow says "Moo!" By now, every Pink Floyd fan can recite the origin story of "Lulubelle III" by heart. The entire inspiration for this album cover was that the band felt that they'd been typecast into "psychedelic space rock" and were trying to break free of this image. Therefore, they ordered that the cover of this album be "very plain." With no further guidance, designer Storm Thorgerson drove out to pasture country to find a cow to photograph. Isn't that the most British story you ever heard?

But see, Pink Floyd most definitely did have a reputation as the spacey space-rock band. They honestly still do to this day. So this album, with an intentionally "concept-less" concept behind it, bears an unadorned cow photo clearly telling you "Space rock? No, we're a cow band now." See this cow? He is not in space. Cow is grounded and down to Earth. We didn't go out seeking enlightenment at the feet of an Indian guru like some British bands we could name!

How can generations of music fans look at this album and miss the humor? Storm Thorgerson himself said that at the time, he found the cow emblematic of Pink Floyd's sense of humor, which he said was underestimated. This is, in fact, a clever satire of pretentious alt-rock bands. That damn cow just drives generations of fans crazy coming up with contrived theories. Oh look, now it's a global warming message!

That cow has a direct line of piss-taking lineage, coming straight down from John Lennon after recording "I Am the Walrus," cackling to himself, "let them try to figure this one out."

OK, but musically what does the title track of Atom Heart Mother mean, or what does it do? Because it sounds just like a movie soundtrack, a natural effect from having a full orchestra and choir right up front. Other bands had orchestras backing the band at the time; "Atom Heart Mother" is all orchestra up front, a collaboration with avant-garde composer Ron Geesin. At the same time, it has its spacey parts, its unearthly sounds, and a choir that sounds like it's singing Latin or something but is actually just gibberish. You know who else is getting rediscovered on the Internet lately with a gibberish song? Adriano Celentano with "Prisencolinensinainciusol."

So yeah, about that soundtrack aspect… 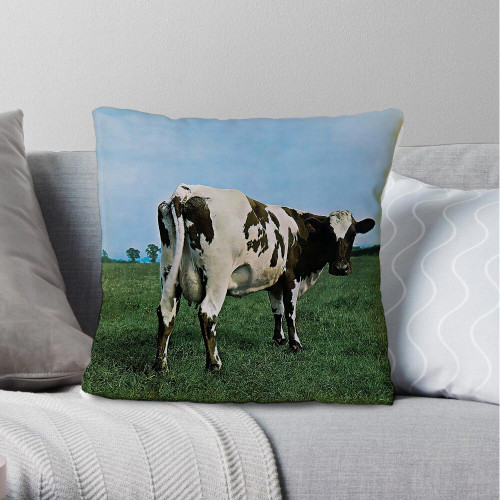 Pink Floyd Even Did Soundtracks Before…

We all know about the beloved Stanley Kubrick who thought to include Pink Floyd's Atom Heart Mother in the record shop scene of the cult film Clockwork Orange. Two cult tastes that taste great together! What many fail to remark upon is that the entire scene in the 1971 film is chock-full of existing band names on real albums for sale in 1970. The scene was filmed at the Chelsea Drug Store, 49 King’s Road, London.

To dive down that particular rabbit hole, my cosmic blueberries, I can not do better than to commend you to artist and designer John Coulthart's blog post on the music store scene in Kubrick's Clockwork Orange. Album after album is pulled from DVD screenies of the film and confirmed, a virtual music tour in itself. As it plays in the movie, typically for Kubrick, the scene is alien enough to have come from Mars, and we barely notice the album covers whiz by what with the low camera angle, blazing set spotlights, and the general sensory overload of the outlandish decoration and costumes set to Wendy Carlos' gleefully avant garde soundtrack.

And of course, we nearly forget to mention the 1969 film More, which featured Pink Floyd songs throughout on a very generous license basis on the band's side. Perhaps this changed the band's taste for film soundtrack offers in the future.

Can We Give Atom Heart Mother a Break Please?

It's just one of those underdog albums which appears to have been ahead of its time, and probably would be buried in history without having an auteur film director stubbornly preserve a cover snapshot of that famous cow. Before the rest of the world loved it, Stanley Kubrick loved that cow first.