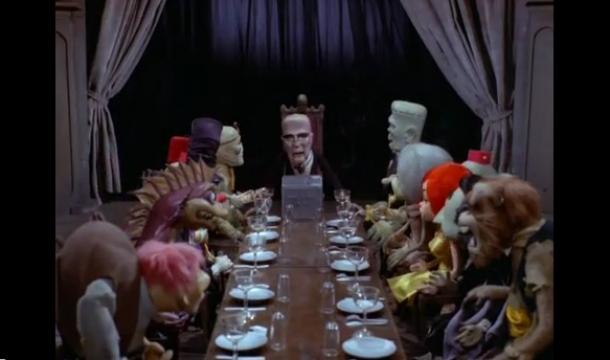 Hello, True Blue Believers! In the past, we've blasted your neurons with spooky playlists for your Halloween partying. We've covered Classical Selections For Your Halloween Playlist, Lyric Interpretations' Rock Picks For A Beggar's Night Playlist, and if that isn't enough, we've covered The Top 7 Villain Songs, and for real horror (as close as you can get in real life), there's Dangerous Music.

So about all that's left in the category of scary music is songs from film and TV. And the pickin's here are pretty ripe. Enough foreplay, let's get to it:

Here just so nobody whines that we forgot it. Look, we like Ghostbusters and all, but this isn't a particularly scary song, OK?

"This Is Halloween" - The Nightmare Before Christmas

This is the other song we have to include or you'd bark at us, but this one is justified. But why waste pixels telling you about this song when we have some undiscovered treasures you'll be delighted to find out?

The shower-scene theme from Psycho

Classic and iconic as far as horror soundtracks go. Many modern horror movies owe a huge debt to Psycho soundtrack-wise. That's the work of legendary film composer Bernard Herrmann, a frequent composer for Hitchcock's most iconic scores. Herrmann was reportedly cramped by the low budget for Psycho, but he made it work by composing for a small string section instead of a full orchestra, resulting in a tighter, more intimate aural atmosphere.

It's a close call with The Shining. But we'll have to go with Krzysztof Penderecki's inspired madness, the music playing during some of the scariest scenes late in the film. It combines every element into the closest thing to the sound of terror itself, imitating screams and the rattle of bones. Our close second is the opening theme "Rocky Mountains", which is an oppressive, threatening wall of sound that makes the best opening to a scary film ever.

The theme from The Addams' Family

No need to post it here as we're sure you've all heard it. But dollar for dollar, the original Addams' Family series blew away The Munsters, which was a pale imitator brought in by a competing network.

The theme from Alfred Hitchcock Presents

OK, we're sure you've all heard this too, but it's awesome, so deal with it. The theme, by the way, is "Funeral March of a Marionette" by classical composer Charles Gounod.

Hoo-kay, your Halloween film & TV playlist is definitely not complete without this. I mean, trick-or-treat is referenced right in the lyrics because "when you knocked, he thought you were the candy-man." Rocky Horror has become one of the official films of Halloween. And oh, this scene! You like how they played the elevator, just so repeat fans of the show can count down to Tim Curry's entrance? It's enough to make you shiver with antici.... pation!

"Dark Night" - From Dusk Till Dawn

Southern Gothic, fried in Tex-Mex, and served up with ancient Aztec vampires and enough buckets of blood to sink the Titanic! What's not to love about The Blasters' perfect opening to this very different film, done in a style that's almost a precursor to psychobilly? So good, it even fit as the closing these as well.

Our #1 recommendation! We opened with Danny Elfman with "This Is Halloween," it's only fair we close with the work that served as the seminal bedrock of his entire career. We're raved about Forbidden Zone before, but now we have to get downright indignant about it: It is not fair that Forbidden Zone isn't played on a double bill with Rocky Horror on Halloween. And we're going to hold our breath and turn witch's-brew-blue until this gross oversight is corrected!