Listen To Me - Songs About Alice In Wonderland 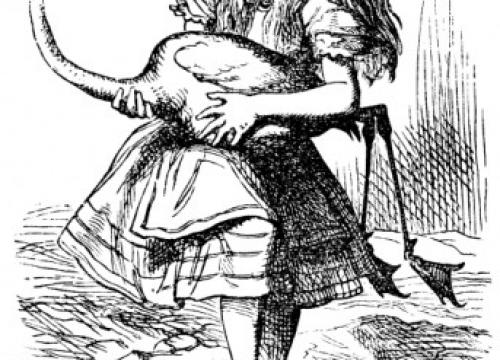 It's been exactly a century and a half since the initial inspiration of Lewis Carroll's Alice's Adventures in Wonderland and nearly as long since the sequel, Through the Looking-Glass. According to trivia website 'Brain Pickings',  it was July 4th, 1862, that Carroll first met the little girl who would become the inspiration for his character of Alice and began to form the whimsical story of her adventures. And the stories have been misunderstood ever since!

To clear up a thing or two, Lewis Carroll wasn't just writing psychedelic trippy stuff for the hell of it. He wrote in a form of literary riddles. Carroll was actually a highly educated fellow, and all of his stories reflect on his main career in logic and mathematics. Many of the elements of the books referenced all sorts of real-world ideas that were current at the time, but unappreciated today for the clever satires they were. For example, "hatters" (that is, people who made hats) had to use mercury in the treatment of animal hide used to make hats, and since they worked by candlelight with the stuff, they were frequently victims of mercury poisoning - symptoms of which include delusional reasoning and slurred, drunken speech! So, yes, you really could be called "mad as a hatter" back then, before the world ever heard of Alice.

Nevertheless, the "Alice" universe has been absolutely kidnapped by the psychedelic movement. Scores of films, video games, and fan fiction has focused on the "acid trip" factor and not cared a white rabbit's whisker for the subtext. And the songs do that, too.

To get on with it: Songs about Alice, caterpillars, chess queens, and whatnot:

The Walrus is a character in the short poem "The Walrus and the Carpenter" from the second book. Lennon didn't twig at the time to the idea that the Walrus was the villain of the story. As for "Lucy", the song was mostly about his son Julian's school finger-painting, but the part about drifting past cellophane flowers in a boat was cited by Paul McCartney as an Alice reference.

The most obvious example. "White Rabbit" is especially stamped into psychedelic culture, such that any time a character in a film or TV episode drops acid and has a trip, "White Rabbit" will play in the soundtrack to let the audience known that it's trippy-time. Also used in both the film and book version of Hunter S. Thompson's Fear and Loathing in Las Vegas, when his lawyer is spaced out in the bathtub with this song playing.

Written specifically for the 2010 Tim Burton film version. The soundtrack album is called Almost Alice and all of the songs on it, including Kerli's "Tea Party" and Franz Ferdinand's "The Lobster Quadrille", also count here.

"The Walrus and the Carpenter" and "Jabberwocky" - Donovan

That Walrus really seems to get around! Scottish folk singer Donovan put both of these Lewis Carroll poems to music, plain and simple, on his 1971 album H.M.S. Donovan. By the way, the song "The Owl and the Pussycat" on the same album does not come from a Lewis Carroll poem, but an Edward Lear poem.

From his 2001 album Love and Theft. The two twins, comic relief clowns that they are, are also from the second book. Interestingly, the two are portrayed as identical brothers, but they have different last names and the same first name, exactly the other way around from what you'd expect. Also, they come from an even earlier nursery rhyme, whereas nobody today is aware that they are anything but Carroll's own creation.

"Eat Me, Drink Me" - Marilyn Manson

Not just the song, but the album it's titled after. All of the songs on it kind of count here, because the album Eat Me, Drink Me is a concept album that uses the "Alice" universe as one of its subtexts. They're named after the instructions one finds on food and drink in Wonderland. Incidentally, you know when you install software and it comes with a file called some variant on "README.TXT"? Same inspiration!

The song itself doesn't reference Alice in any way, shape, or form, but the unforgettable video that goes with it turns it into a nightmarish Wonderland vision, with Alice getting cut up like a cake and served out to tea party guests, and old Tom himself filling the Mad Hatter's lid.