Revenge of the Unknown Ubuweb Songs 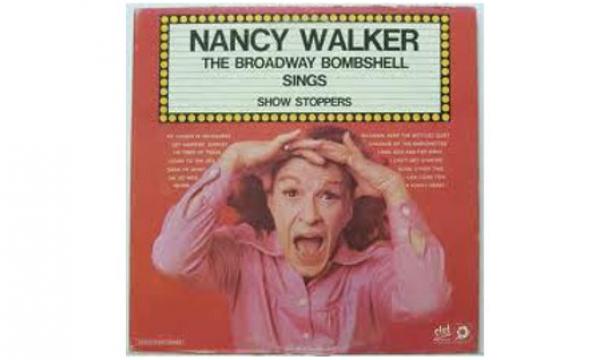 A long time ago (in a galaxy right next door to Loopyville) we covered the marvelous archives of the obscure, offbeat, and ridiculous. Those posts are here:

...and now we'll revisit this silly space. Because it's fun, you get to discover something you've never listened to before, and this just feels like the right time of year for novelty weirdness.

Take the karaoke track to James Brown's "Papa's Got a Brand New Bag," but instead of vocals, substitute a trip to the toy aisle of Dollar General where you raid the New Year's Eve noise-maker shelf and play everything you can get your mitts on. And the point of this was again?

Suggested listening: Right after you've finally listened to your mother and packed up to leave the big dumb jerk.

Before you get to thinking that this was original with her, Nancy Walker's whole album is composed of cover songs of established stage musical numbers. But you might be forgiven for suspecting that if your whole career were defined by cleaning up after baseball teams while hawking paper towels, you'd hate men too. I mean come on, he deliberately pours the creamer on the counter right in front of her - just "Guess where this goes? Right there! Yeah, now mop it up, wench!"

Suggested listening: Any public activity that begins with alcohol and nudity and ends with your mugshot on the front page of a Florida newspaper.

Crank your speakers up for this one! This song is living proof that what you lack in talent can be made up in ENTHUSIASM! Mind you, the write-up says that he was dead serious about his music. He hated to be laughed at. So no laughing during his performance; you laugh, you lose. This guy was inventing psychobilly before The Cramps were a twinkle in a studio executive'e eye.

Suggested listening: At your next Magic: The Gathering FNM draft (Khans of Tarkir debuts this weekend! Go team Jeskai!).

Well, this should be some relief. This is an actual professional number for a change, in fact even a staple of the venerated Dr. Demento radio show. Freddie Blassie was a professional and all, after all. We didn't say what profession. And nowadays, this song is awash in irony, as the meaning of the word "geek" has come all the way around from what it meant at the time of this song. Which is why we need it now more than ever, to bring "geek" back to being an insult so everyone will quit pretending to be one just to be cool.

Suggested listening: Doing anything at all but exercising.

How about Robert Preston, in character as professor Harold Hill of Music Man fame, making a record to motivate teenagers at P.T., in a government-funded project that sent records out to all the public schools in the nation? Singing a song all about chicken fat? Why haven't we outlawed high school P.T. yet? It's just an excuse for pervert coaches to leer at pre-legal girls in tight shorts, when they aren't busier looking at the boys.

Come on, everybody, sing along! "I'm oh so bloated 'cause I pass-a no gas!" See, this was the Greene County Boys - a sextet of doctors. And if you think "Pass-a No Gas" was a blow-out, wait until you hear their other medical-themed numbers, including "A Little Pentothol," "It Must Be a Virus," "Halitosis Beats No Breath At All," and who can forget the smash hit "Menopause"? Three albums put out by these guys to fund medical scholarships - and they're just lying dormant, undiscovered, awaiting their explosion onto the Internet for meme immortality!

Here it is, dear readers. The fate of the fame of The Greene County Boys now rests in your hands. With no bid for our own site's popularity, we will state bluntly that if you do not do everything in your power to spread the genius of the Greene County Boys to the web at large, you'll just have to live with yourself for the rest of your life.