Is Maroon 5 a Beautiful Mistake? 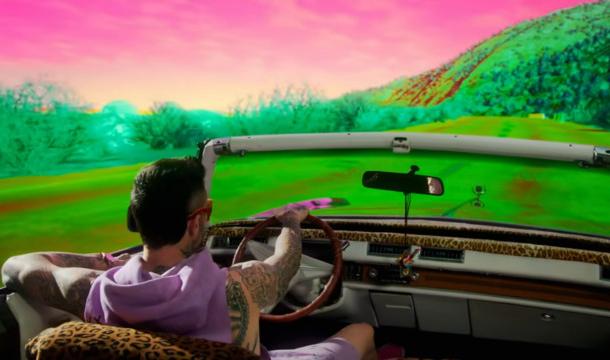 (Sometimes I try to do things and it just doesn't work out the way I wanted it to. And I get real frustrated, and its like, all I wanted was a Pepsi just one Pepsi...)

This is the story of a band called Maroon 5, whose color faded to a pale gray blush when their number came up. 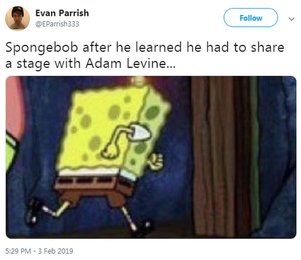 How Does Music Get Stale?

Over the last couple decades, one adjective keeps bubbling to the top in popular music discussion: "mediocre." What do we mean when we say that some music is mediocre? Because of the business bylaws of capitalism, producing content is a risky endeavor. You can take a daring, bold, original direction with your art and release it, only to see it land with a thud. Or you can stick by the time-tested, safe formulas that have come before you. Nothing succeeds like an imitation of success.

Applying the safe path to music produces this unoriginal sound which is basically a continuation of songs you already know. The technology is not quite there, but you can see where an artificial intelligence program might soon be able to write pop hits. Like most artificial intelligence, you would simply train it on algorithms like the four chords of pop. Break music down to its base elements, and you have a selection of synthesized tracks, repetitive rhythms, basic beats, and canned guitar hooks.

Recall my little visit to the world of Corporate Nothing Music, inspired by one of the best YouTube music bloggers, Tantacrul. To make "nothing music," you produce a paint-by-numbers tune from a template and a library of blandly pleasant synthesizer loops. It is listenable for the five minutes it takes to run through your corporate training video, or a video ad, or the intro to your podcast. Listening to it longer than that becomes annoying. That's because it isn't aimed to accomplish anything, it is instead used as air filler, an audio background to fill silence. The musical equivalent of drywall.

When we do this to music, we rob it of any passion or ambition. It is lazy music produced by punch-clock session musicians whose entire ambition stops at keeping you half-awake.

And really, you can apply these same observations to other mediums besides music. The same driving forces are at work when Hollywood churns out cookie-cutter superhero flicks and TV loops through reels of tired reality shows.

The "mediocre marketability" factor applies to blogging too! The problem with writing for a mass audience is that originality often fails while imitation often succeeds. I can spend weeks sweating to create a profound artistic masterpiece - it gets 3 likes. Or I can repost a meme I copied off the web under the latest Twitter hashtag game and reach an audience of over 100,000, according to Twitter analytics. For a tweet that required no thought, just some thumb twitches. 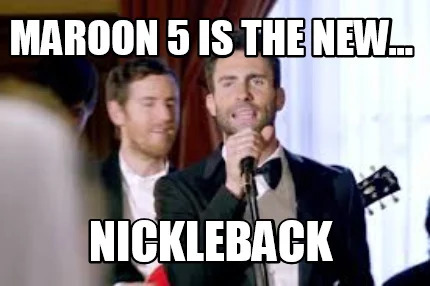 Maroon 5 | In With a Bang, Out With a Whimper

In the year of our lord 2002, two decades prior to this very writing, Maroon 5 dropped Songs About Jane. It was a smash hit and worldwide sensation, multi-platinum and multi-gold with worldwide sales of ten million. Among the crowning singles from this album are "Sunday Morning," "Harder to Breathe," and "This Love." You know what stands out about those three songs? You can tell them apart! "This Love" is dramatic with a piano-led tune in a moody C minor key. "Sunday Morning" is jazzy and positive with a sunny C major key, again on warm piano tones. "Harder to Breathe" is an angry, indie song in an edgy C minor, this time stabbed in with a guitar hook. These songs have some feelings.

Maroon 5 in the early 2000s cited influences like Stevie Wonder while a UK Times reviewer compared them to - are you sitting down for this? - Led Zeppelin. They were also compared to Matchbox 20, as a solid pop band who were churning out crowd-pleasing, well-written tunes. The harshest Maroon 5 critic will agree that their earlier output was at least trying to be good.

In the hence years, the critical praise grew less and less enthusiastic as the band's sound sold out a little more with every album. But music labels love a sell-out! Whether it's KISS or The Monkees or U2 or Nickelback or Fall Out Boy, corporate labels love a passion-less band which just wants a steady paycheck. They'll pose for lunchboxes, they'll play at any gig (including that career-killer of sell-out moves, the Stupidbowl), they will go on world tour after world tour without making any waves. This is why their albums have continued to be platinum and gold. Suck up to your slavemasters hard and they'll make sure your chains are polished and your kennel is clean.

Here is a list of sell-out bands, and guess who is at the #2 spot? Let me quote from the bit on Maroon 5:

> "...[they sound like they just gave up on making good melodies. "Beautiful Mistakes" is an overwhelmingly boring song with a robotic melody, trite lyrics and a phoned-in Megan Thee Stallion verse, and yet it's not even the worst song on the album, as the rest consists of bland beats, Adam Levine's tired vocals and lots of AutoTune."

Yeah, just listen to "Beautiful Mistakes," and try to tell me that this is the same band that made Songs About Jane. How does this song suck, let me count the ways:

"Na na na - in my be-ed. Na na na - in my he-ad." Couldn't you just cry? It's like the Bodysnatchers got Adam Levine, or maybe he's been replaced by a mannequin with a Bluetooth speaker in his mouth. Even the video is boring and phoned in. How many videos about singers driving a convertible around town do we freaking need already? Even the album title, Red Pill Blues, would fill us with the bowel-freezing terror spawned from the spectacle of Levine descending into Matrix-madness, if we were not assured that they arrived at this title by spinning the wheel of Twitter hashtags on the morning of the day it was time to name the album.

That's just one out of many indistinguishable album spam songs that have become Maroon 5's entire act.

No Adam, the only mistake you're making is staying in business. And it is not a beautiful one. 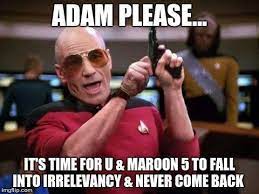