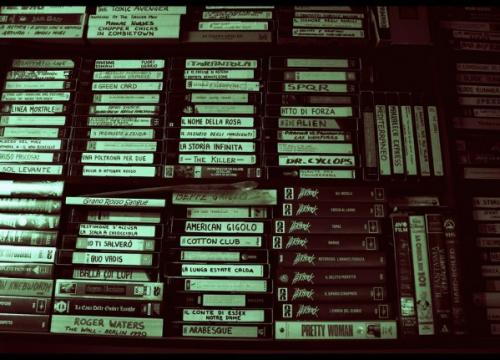 When you grandkids someday ask you "Oh, grand-papa, what were the dubstep days like?", what are you going to tell them? How do you describe a whole music subculture, together with the clothes, scenes, and fads that went with it? It helps a lot to have a whole film so you can just show them and say "It was kind of like this."

The great dubstep film has yet to be made, but in the meantime, we have some films which do a fantastic job of showing the spirit of their own times - in some cases, they're even better for their historical significance than they are for a film.

Of all the films, you wouldn't expect one done in Salt Lake City, Utah, to be the most authentic memorial of just what went on in the punk rock heyday. But in fact, the whole film counts as a deconstruction of the whole culture from the top down, complete with extensive monologues by the lead character who explains several points of being a punk. And its soundtrack is chock full of Dead Kennedys, The Stooges, Velvet Underground, Ramones, and other bands that '80s punks really listened to, as opposed to those softcore posers that Madison Avenue marketing drones think '80s punks listened to. As a bonus buck, the location filming is a nostalgia trip for anybody who grew up in the area at the time.

Leave aside two cardinal sins this film unapologetically commits: One, it omits the Frank Zappa song of the same name made just the year before, and two, it has Nicholas cage in it ("Not the BEEEES!"). New wave fans will burble with joy at the pumping Modern English and Psychedelic Furs in the soundtrack, Southern Cali mall rats will wax nostalgic about the San Fernando culture of materialistic hedonism, and, as unbelievable as it is, they really did talk that way.

Most films of the disco era that tried to capture disco stank to high heaven, so your pickin's are pretty slim here. But in this case, it was done right. They didn't try to make a timeless masterpiece or take themselves too seriously, and they didn't try too hard to make fun of themselves. As a result, they produced a lightweight, fun, easy-to-watch film; it asks nothing more of you than that you sit back and munch popcorn and grin. And for the soundtrack, they had amazingly good taste, picking The Commodores, Village People (give them a chance, "Y.M.C.A." and "In the Navy" weren't their only songs), Fifth Dimension, Diana Ross, and Donna Summer - who damned near smokes the film right off the reels when it's her turn to take center stage.

Everyone forgets that before he disappeared down the Star Wars rabbit hole, George Lucas made this quite dignified period piece. Not only is there an authentic reproduction of the cars, clothes, slang, and culture of the late '50s/ early '60s, but the soundtrack stands today as one of the epic achievements of cinema. Big Bopper, Beach Boys, Chuck Berry, Platters, Lee Dorsey, Buddy Holly, Bill Haley, and it just keeps getting better from there. It's even served up by the real-life Wolfman Jack (born Robert Weston Smith). And for a bonus buck, keep your ears open for the character of John Milner who laments what those surf-rock songs are doing to his beloved rock 'n' roll.

It is so recognized today that it's considered one of the greatest counterculture films. And for a road flick (the perfect way to capture an era, by the way), it films some of the most captivating Southwestern US scenery ever to grace the screen - we might some day watch this film to find out what America used to look like. But to the soundtrack and culture capture, it perfectly grabs the moment when the hippies of the '60s became the biker metal-heads of the '70s, with a pass through folk music. Dylan, Hendrix, and Steppenwolf paint an aural canvas every bit as compelling as the scenery.