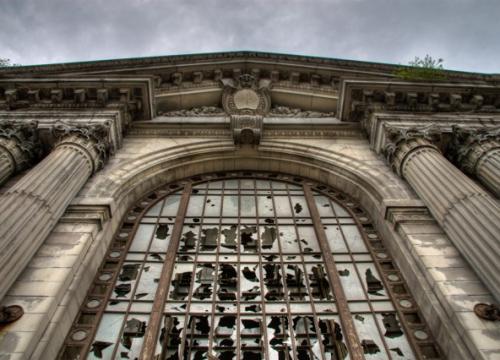 Ever since Michael Moore's 1989 documentary Roger & Me, people have been feeling sorry for Michigan. It could use some good news. Especially since the auto manufacturing industry - and industry in general - has just about shut down across America. But the great hope is that America will continue to flourish in the one industry that's still going strong - manufacturing media and culture. Oh, the US cities which have made their mark on the world music scene: New York; Los Angeles; Memphis, Tennessee; Minneapolis with Prince; Philadelphia riding a Soul Train; Seattle, Washington with grunge; San Francisco with psychedelic rock... and now Detroit, Michigan gets a second swipe after Motown in the '60s.

Chris Smith's 101 Albums that Changed Popular Music hailed The White Stripes of Detroit as one of the four "saviors of rock 'n' roll." These were the mad scientists experimenting in the garage laboratories, bringing us a post-punk, garage-rock revival, with a different attitude that was fresh and refreshing, and their sound clears the mind of the fog left over from yet-another buzzy grunge copycat band.

The Detroit garage rock revival movement, now that The White Stripes are hanging it up, include The Von Bondies, Electric 6, The Dirtbombs, The Detroit Cobras, Gore Gore Girls, The Muggs, SSM, and The Sights. That's just to name the most outstanding examples.

Every twang of guitar string, beat of the drum, and stomp of the foot is one more stake they drive into the heart of stale corporate radio rock. Try this: load up a playlist with just those bands mentioned in the last paragraph; don't agonize over which songs, just pick any two by each band.  Plug them into your headphones, and then go to work. Forget about the playlist, just do your stuff with the music in the back of your mind. See if three hours don't utterly disappear, leaving you feeling like you've just taken a vacation to an alternate dimension. Like a spanking to a masochist, the brutal beats of the 21st century Detroit music scene hurt, but they hurt so good, their endorphin rush is so sweet, that you immediately want it again and even a little harder next time, even if it leaves bruises.

At The White Stripes' breakup announcement, Whites Meg and Jack stated that the reason they were calling it quits wasn't because of artistic or personal reasons, but simply "to preserve what is beautiful and special about the band." In other words, their work is done. They lit the fuse, and dozens of bands exploded forth. They led the chosen people to the promised land, and now it's Miller time.

Doesn't it feel just like the '50s, when rock 'n' roll was new and could still get you thrown out of church? The prophet Chuck Berry decreed: "Hail, hail, rock and roll, deliver me from the days of old!" And yeah, verily, it cometh to pass a second time, just when it was looking like the blood and guts had all been sucked out of the scene.