There's A Song For Every Phobia 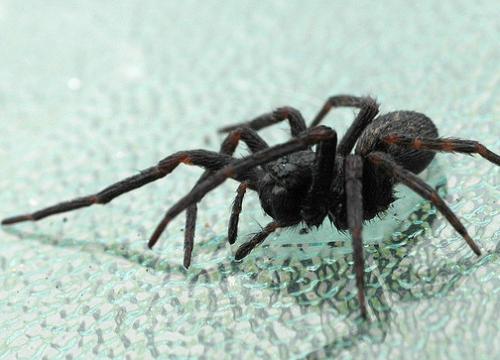 And by that, we mean "a song to aggravate every phobic's specific fear". Don't believe us? Well, just check out these songs that match up with some of the most common phobias:

The theme from "Spider-man" - For starters.

The Black Widow - From Alice Cooper's album "Welcome To My Nightmare".

The Itsy Bitsy Spider - Yeah, the children's nursery rhyme. The perseverance of the spider must make it especially chilling. That spider's just gonna keep on coming, just like the Terminator. Must make it difficult to watch the film "Heartburn", which has this for its theme song.

Baby Snakes - On Frank Zappa's "Sheik Yerbouti" album, as well as a whole soundtrack album and concert film of the same name. Lyrics like "Late at night is when they come out; sure you know what I'm talkin' about." and "Looked around and there's a couple right near me. Maybe I think they can probably hear me." just add to the fun!

High Enough - Damn Yankees' 1990 hit. "Can you take me high enough to fly me over yesterday?"

Vertigo - U2's 2004 hit. There's an Alfred Hitchcock film by the same title, by the way, where Jimmy Stewart is paralyzed by a fear of heights after watching his cop buddy fall off a roof while he hung on. Naturally, his next case involves dealing with high places as well.

Agoraphobia (fear of being trapped, crowded, or pressured)

Pressure - Billy Joel hit 1982 single from his album "The Nylon Curtain". Doubly assaulting for the maniacal synthesizer hook and the lyrics referring to loaded guns and scars in your face.

The Mob Rules - Best reason not to go outside! Black Sabbath's 1981 album of the same title, from their Dio phase, of course. Think of rioting masses trampling over you as they loot and smash and pillage.

Trapped In A Box - No Doubt's self-titled debut album. "Trapped in a box of tremendous size. It distorts my vision, it closes my eyes. Attracts filthy flies and pollutes in the skies. It sucks up our lives and proliferates lies."

Dogs Of War - Pink Floyd, the "A Momentary Lapse Of Reason" album. The definition of "ominous", with apocalyptic orchestra, screaming megaphone vocals, and threatening lyrics. Plus actual growling dogs at the beginning.

Dogs - Pink Floyd again, from the "Animals" album. "You'd better watch out! There may be dogs about!"

Who Let the Dogs Out? - Baha Men, 2000. Whoever let them out, a cynophobiac must want them put back.

Thunderstruck - AC/DC, "The Razor's Edge" album. The chant of "thunder!" is enough to scare you away, and in fact people afraid of thunder should probably stay away from AC/DC concerts anyway, which do their very best to emulate the texture of a thunderstorm in their music.

Down Under - Men At Work. The lyrics declare Australia to be a place where you could hear "the thunder" and hence should "run" and "take cover", spoiling Australian tourism for astraphobics forever.

Lightnin' Strikes - Lou Christie, a #1 hit in 1965, and a permanent staple of every oldies radio station since.

Trypanophobia (fear of needles and injections)

Bad Medicine - Bon Jovi, for referring to needles, shots, and "leaving tracks" (what needles do to your arm if you use them a lot).

The Needle and the Spoon - Lynyrd Skynyrd's second album. You might as well include every song about heroin, because 99% of the songs that mention needles and shots are about that anyway.

The Needle And The Damage Done - Neil Young's "Decade" album, also about mourning the loss of a bandmate due to drugs.

Shining Happy People - R.E.M. A wonderful idea for everyone else, a social phobic's chief source of anxiety.

It's My Party - "And I'll cry if I want to." Lesley Gore's 1963 hit, also familiar to oldies' stations. And what could be worse for social phobia than being humiliated by finding out you've been dumped at your own birthday party?

I Am A Rock - Simon & Garfunkel. The ultimate anthem of the socially anxious, where they cut themselves off from the world to avoid feeling the pain of rejection.

Learning To Fly - Pink Floyd, from "Momentary Lapse Of Reason" again. Inspiring and uplifting, unless flying terrifies you.

Learning To Fly - Tom Petty and the Heartbreakers.

Flight of Icarus - Iron Maiden's iconic ballad from "Piece Of Mind". And Icarus, from Greek mythology, may have been the originator of the idea of flying being a scary thing in the first place.

Mysophobia (fear of dirt and germs)

The Dangerous Kitchen - Frank Zappa, "The Man From Utopia" album. "It's disgusting and dirty. The sponge on the drainer is stinky and squirty if you squeeze it when you wipe up. What you get on your hands then could un-balance your glands and make you blind or whatever." You're screaming already, aren't you?

Down With The Sickness - Disturbed, which had the gall to make this song before Richard Cheese got a chance to own it righteously and then get it included in the soundtrack for the excellent (for a change) 2004 remake of "Dawn of the Dead".