Where are they Now? - Garth Brooks 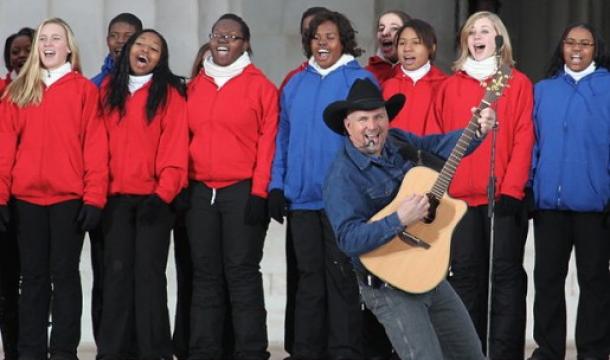 Garth Brooks. Every country music fan knows the name, and he was one of the top-selling country artists of the 90s. Garth vanished from the spotlight in 2001 and aside from a stint in Vegas and a few shows here and there, there has been no new music from Mr. Brooks. With that in mind, we thought we'd take a look at what Garth has been up to, and what the future holds for the popular country crooner.

First a little background for those who may not be as familiar with Garth's tunes. Garth Brooks self-titled debut hit the masses in 1989 - it was a huge hit. The album hit number 2 on the country charts and got all the way up to number 13 on Billboard's pop album chart. The album produced several hit singles, and it also produced Garth's favorite song with "The Dance."

Throughout the 90s, -Garth continued to crank out hits and in 1999 -Garth decided to mix things up a bit, and it would prove to be an unpopular move with his fans. The Lamb was supposed to be a movie about a fictional star with an emo vibe. Chris Gaines was the fictional singer, and Garth took on that persona to put out an album which was supposed to hype up the upcoming flick. "Garth Brooks in The Life of Chris Gaines" didn't go over well with fans, and while it was a courageous move by the singer, but it didn't pan out as the album underperformed and the movie never saw the light of day.

Garth had often spoke of retirement over the years, and on October 26, 2000 he made it official, and has only produced one more album (Scarecrow) since that time. He basically stuck to the plan until 2009 when he started doing weekend performances in Vegas which came to a close in late 2012. We'd be remiss if we didn't mention the fact that he divorced his high-school sweetheart in 2000 and married another country superstar you may have heard of in 2005 Trisha Yearwood.

Garth has also been charitable in his retirement.-The singer has performed-at countless events to raise money for disaster victims across the country including a benefit to help folks in Middle Tennessee in 2010 and another with Toby Keith and friends to benefit Oklahoma tornado survivors earlier this year.

If you're wondering what Garth's up to these days, you won't have to wonder for long. The singer has often said he wouldn't perform "full-time" again until his youngest daughter turned 18. Well, she graduates next year, and on October 18th Garth sent out a cryptic email to fans that said, "The sevens have aligned. It has begun. Thank you for believing. love, g."

While it doesn't guarantee the singer is coming back, that coupled with his daughters graduation and a live TV Concert on CBS November 29 seem to suggest Garth is gearing up for a comeback. If true, and the "sevens" have actually aligned you can expect to hear some new tunes from Garth in the coming year.