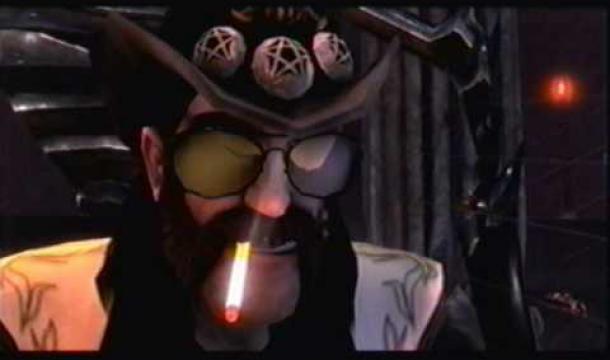 This may come as jaw-dropping news to some of you minions, but there's a heck of a crossover between video game players and metal fans. Who'da thunk it? Ever since Nine Inch Nails did the soundtrack for Quake, video game companies have been snuggling up to the harder side of the rock category - you'll also notice that when you find somebody playing Guitar Hero, they're almost never playing Neil Diamond.

So, Brutal Legend, whole title is slathered with umlauts that we'd just as soon not belabor your browser with:

Brutal Legend came out in 2009 and was kind of a lungfish of a game. It mixes elements of RTS, driving, a little bit of rhythm, and a whole lot of cut scenes. Gamers were divided on how well the playstyles blended. But this is a music blog; who cares about game play? We're here for Lemmy Kilmister as the "Kill Master," Rob Halford as "General Lionwhyte," Lita Ford as "Rima," and nothing less than Ozzy Osbourne as the "Guardian of Metal." Oh, and we almost forgot, Jack Black voicing the lead character Eddie Riggs.

In fact, that's just scratching the surface! There's over a hundred songs in here by the top metal acts, some original, some licensed. Which makes it pretty amazing that this game ever got made, what with all the band licensing hassles.