Hey, There's More To Devo Than "Whip It," You Know 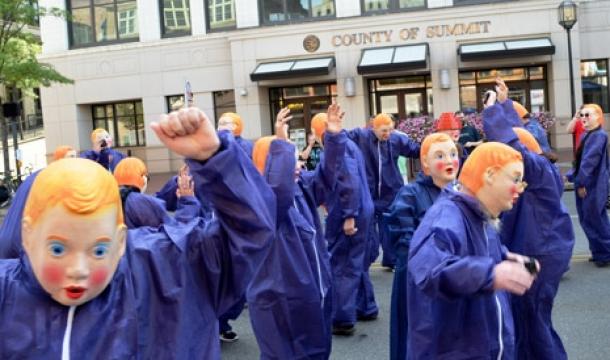 Every now and then, we like to take a free-association dive into the complete artistic tornado around a band and fully embrace their worldview. The trouble is, there aren't many bands that make good diving territory. Most of them have a shallow depth that would barely wet your toesies. But occasionally, you have a group like Beatles or Parliament/Funkadelic or David Bowie or Prince, with a fully-realized career and an artistic catalog big enough to get lost in.

Which brings us to Devo. Devo is plenty deep! And yet what does mainstream media dwell on? "Whip It" and the red plastic hats.

Have you seen a Devo video lately? Did you, in fact, know that Devo is back together and still around?

That is their most recent video "What We Do," which came out in 2011. However, their most recent album is 2016's "E-Z Listening Muzak," albeit a re-hash of their earlier work. So yes, the band is likely in its dwindling phase, but still active. It has to be, because Devo leader Mark Mothersbaugh is just one busy little bee. Not to take away from the rest of the band, but Mark juggles a lot more than just the band. He has composed the soundtracks / themes for shows such as Rugrats, Beakman's World, and Sliders, and films such as Cloudy With a Chance of Meatballs, Rushmore, and Doctor Detroit.

And then there's the non-music work. For example:

He has a separate website just for the visual arts work, and has a busy gallery showing schedule, right through the pandemic and everything. Speaking of the pandemic, Mark Mothersbaugh did indeed catch COVID in 2020, and pulled through, albeit hatin' it all the way.

Then there's the vast menagerie of multimedia projects, some realized, and some still stuck in development limbo. There's the yet-unmade musical film they would have set in Spudland, the mythical universe created by Devo. The Spudland mythos is why their fans are called Spuds or Spudboys. Not to be confused with a Booji Boy: 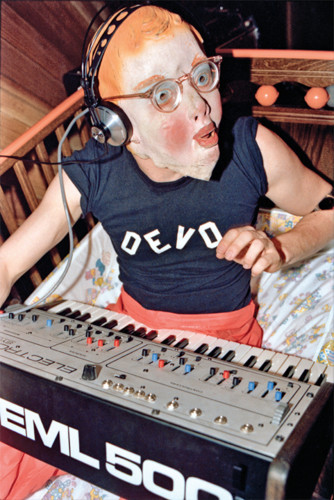 In fact, this is a good time to mention that the Devo mythos includes oodles and oodles of characters, which have their own Wiki page and include names like The Evil Clowns, Lifeforms Unlimited (creators of the bio-horror we know as Turkey Monkey), and Pliney the Pinhead (we're sure there's no connection to Zippy). 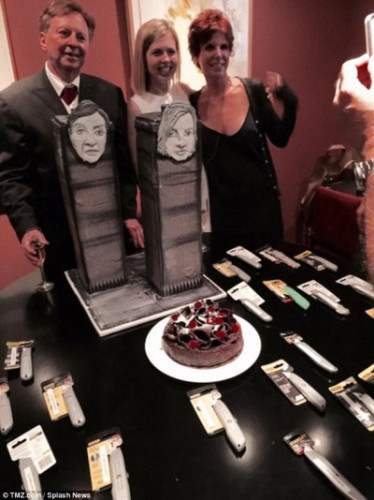 Jerry Casale Had a 9/11 Themed Wedding

Just imagine what kind of cheek you need to pull this off. The bride and groom photos affixed to matching twin tower cakes. Their wedding was on September 11th, see, so they figured just go with it. This was in 2015, when you could still be criticized for not being properly respectful about 9/11, before the following years would make 9/11 seem like a mild fever.

Who else could get away with this? Only the band that brought us the word "Devolution." They also sell enough merch that you could conceivably have your own Devo-themed wedding, or any other occasion. They just hauled off and got a ClubDevo store and you buy Devo stuff there. If your sex life has been short on spice lately, maybe it's because you don't have a set of Energy Dome pajamas.

Their cover of "Working in a Coal Mine" managed to struggle up to #43 on the Billboard Hot 100, which would have been really funny if it had gotten into the top 40 and become their other hit. As it is, it showed up on the soundtrack to the bafflingly boggled 1981 film Heavy Metal. It didn't fit any better than half the rest of the non-metal soundtrack, and was of course wasted in the movie's cut like most of the expensive soundtrack was.

Oh, I mentioned their other movie soundtrack involvement, but forgot to mention The LEGO Movie, where Mark Mothersbaugh also did the soundtrack. His song "Everything is Awesome" got a nomination nod at the Oscars for Best Song.

After all, it was the LEGO movie, and Devo's signature Energy Dome hats (yours for just forty scoots off the merch page) look like LEGO pieces anyway. How could you do the LEGO movie without inviting Devo?

Gerald V. Casale Has His Own Solo Site

And at his own site, he hosts some off-shoot projects, like the music video to "I'm Gonna Pay U Back," with drumming Josh Freese and directing Davy Force. You can't miss it. It's the big embedded video right at the top. The animation in that video is an eerie blend of rotoscoped CGI and sidewalk chalk drawing.

Devo has this kind of chummy relationship between artists, without all the ego-driven bickering that drives other bands apart. If you want to do a solo project, you go right ahead off and do that, and then come back to be a Devo again. It's the "open marriage" band policy, which means that Casale can run off to become Jihad Jerry & the Evildoers. 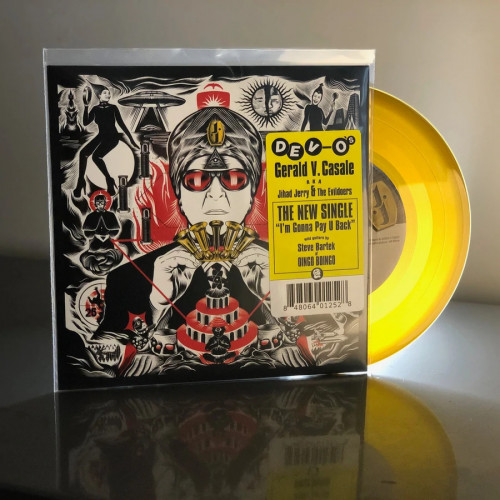 He even gets his own YouTube channel, but is still part of Devo. Likewise… 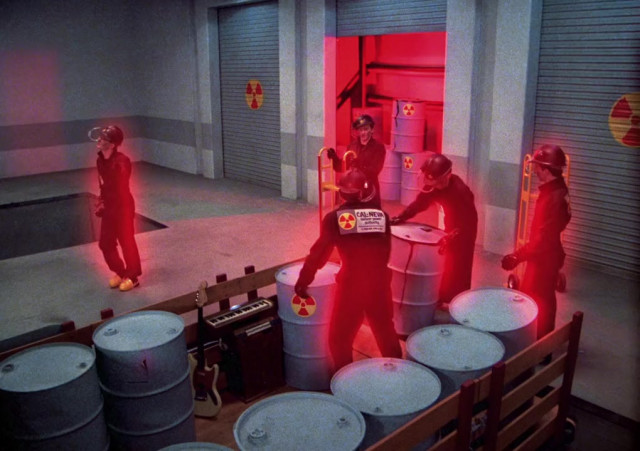 Devo Was In a Whole Movie Directed by Neil Young

Well, Neil Young (you know, the guy pressuring Spotify about Joe) co-directed, along with Dean Stockwell. That movie is Human Highway (1982) and Devo is in this movie, along with random oddballs like Dennis Hopper, who seemingly never met an off-beat movie idea he didn't like. 366WeirdMovies has so far given it a maybe, but we'll see what further reviews there have to say.

Human Highway isn't about much to speak of, basically a loosely themed punk-desert post-apocalyptic riffer with random songs thrown in. Even hardcore fans of either Neil Young or Devo are walking around today never having heard of this movie.

Devo Has Made A Video Game

So now along with all the games Mark Mothersbaugh produced soundtracks for (Notable franchises include The Sims and Crash Bandicoot), there was also this game called Devo Presents Adventures of the Smart Patrol. Released for desktop systems in 1996, the whole group helped oversee the graphics and story, as well as composing the soundtrack.

The game was panned and thrashed by critics who didn't recognize true gen- well, no, the game really sucks. You're running around Spudland trying to catch Turkey Monkey before time runs out, but the real problems were shoddy development and frustrating difficulty. Hence playthrough part 1 posted above.

We Haven't Covered 1/10th of Devo's Madness Yet!

We could go on with this post until it was book-length. For instance, we still haven't mentioned Devo's sorta-collab with John Hinckley Jr., their recipe for Chocolava Stump Logs, Mothersbaugh's cover of "In Heaven" from Eraserhead, their nearly nonstop appearance in ads and commercials over the years, their Saturday Night Live appearance in 1978, the various bootleg tapes and ephemera still just now showing up after all these years.

Bottom line: Quit saying Devo is just "Whip It" and plastic hats, or Pete will be mad at you. 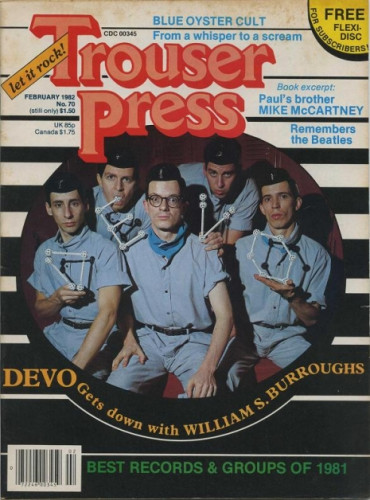