The History behind Me and Bobby McGee 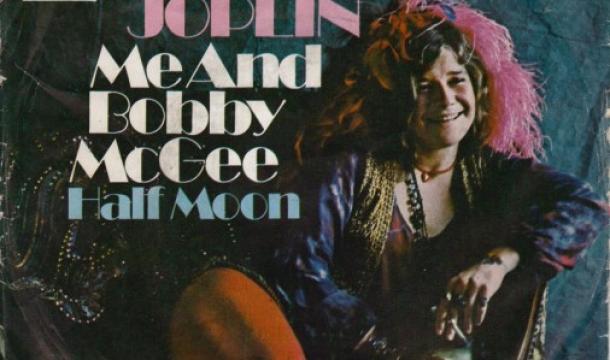 Have you ever heard a song only to find out someone else sang it years or decades before? It happens all the time, and one of those songs that stumps a lot of people is "Me and Bobby McGee" which originally came out in 1969, but the version most people hear today on the radio wasn't released until 1971. Janis Joplin sang the hell out of it on Pearl, the last album before her death, but she was actually the third person to cover the 2 year old song. If you're wondering who wrote the song, you're going to be in for a surprise...

Bobby McGee was originally supposed to be Bobby McKee, and Bobby wasn't supposed to be a boy either. Monument Records founder Fred Foster came up with the idea and pitched it to a singer songwriter by the name of Kris Kristofferson... you may have heard of him or seen his weathered face on the silver screen. Kristofferson misheard "McKee" as "McGee" and came up with the actual song by drawing inspiration from a Fellini film by the name of La Strada. We assume a lot of whisky and possibly other substances were involved, but have no proof aside from the fact it was the early 70s, and that's just how people rolled back then.

When the song was done, it ended up in the hands of Roger Miller who was the first person to have success with the tune as it hit No. 12 on the Country charts in 1969. Gordon Lightfoot got a hold of it as well and took his version up the charts to hit No.1 in Canada and No. 13 on the Pop charts in 1970. While you may have missed those versions, if you love music you've definitely heard Janis Joplin's take on the song. Janis recorded her version in the latter half of 1970 a few days before her death, and it was released on "Pearl" in 1971. Pearl went on to be the biggest selling record of Janis's career, and Me and Bobby McGee was ranked No. 148 on Rolling Stones list of the 500 Greatest Songs of All Time.

Turns out Kris Kristofferson and Janis were lovers for a while in the spring of 1970, and he never even knew she had recorded a cover of "Me and Bobby McGee" until after her death - he heard it for the first time the day after she died. Needless to say, Janis's version is the one that stands out, and it became the only number one single of her career. It's only the second posthumous #1 single in US chart history as well - behind a track by another soulful singer by the name of Otis Redding who saw "Sittin' On The Dock of the Bay" released after his death.

As for the song itself, aside from being inspired by a Fellini flick there is no hidden meaning, and if you play it backwards there are no secret messages about the Beatles... that we know of. The song has always been popular though and has been covered by countless artist from Sam the Sham to Joan Baez, Olivia Newton-John, and the Grateful Dead. While Kristofferson didn't write the song for or about Janis, he has gone on the record saying that the song is, and will always be associated with her. Especially the line, "Somewhere near Salinas, Lord I let her slip away..."