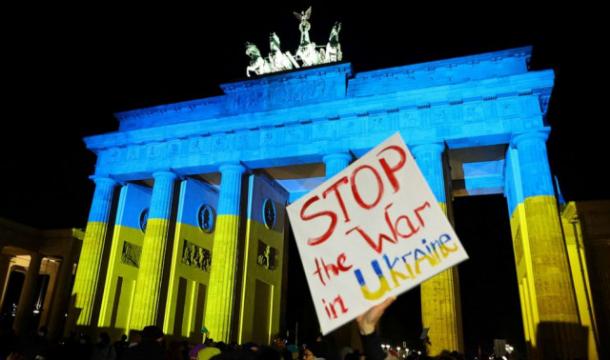 Greetings from the media trenches of WWIII! You humble blogger has been so busy swatting down Russia propaganda bots, egging on hackers to break Putin's infrastructure, and fact-checking battlefield reports that I barely have time to think about music.

But when I come 'round to think about music this Monday (as I inevitably will on a weekly schedule here going forward), only one topic suggests itself. The shock of watching the news unfold as mad dictator Putin threatens the world with his nuclear armaments, while attacking an innocent sovereign democracy, is nothing short of paralyzing. In concert with the war protests we see encircling the globe in support of Ukrainia, we'll offer some popular anti-war / pro-peace songs.

Have these on your phone playlist for demonstration and candlelight vigil purposes. Music is always the voice of freedom!

Michael Jackson and Lionel Richie collaborated on the lyrics to this historic supergroup jam which gathered together the top pop stars of the decade. While this song was originally done as a fundraiser to help wipe out famine in the African continent, its simple message of humanitarianism is appropriate whenever there's a crisis that threatens world peace.

This anthem was composed at the height of United States operations in Vietnam, at the thick of the Cold War. So it particularly fits here, even though the aggressive country is different this time. Creedence Clearwater Revival's cynical but wise message points out that wars are always fought by the poor. The fortunate, born to privilege, never have to go fight the war that the oligarchs insist on waging. The song sounds quite dated at this ripe age of a half century plus change, it's message is sadly as relevant today as it was then.

The Plastic Ono band was, of course, Yoko Ono (do not speak against her talent lest ye trigger my wrath) and whatever musicians she and John Lennon could rope into the studio. You can't get more pro-peace than this song! It's just a big, passionate, group sing-along from start to finish, with some word-play added in from John.

From Irish rockers The Cranberries, this song was written in memory of Johnathan Ball and Tim Parry, two child victims of the 1993 Warrington bombings by the IRA. The song evokes the senselessness of the violence we perpetrate against each other. Indeed, soldiers invading a land shuffle off their personnel carriers like zombies, all identical in uniform. They don't know why they're there and the people they shoot don't know why they had to die.

With typical Punk-Pop outrage and Green Day's signature energy, this explosive video is an angry screed against war and all the senseless destruction it brings. While no specific conflict is mentioned, the album this song comes from, "American Idiot," was basically one whole protest against the US-Iraq war broiling at the time and the general attitude in America under the reign of George W. Bush. Boy, if 2004 could have seen what would hit in 2022!

Alicia Keys is from a new generation compared to the folk and classic rock traditions more commonly associated with anti-war protest songs. So she calls out wars, conflicts, and sites of atrocities one by one, naming Baghdad, Gaza, Harlem, and so on. These touchingly simple lyrics get right to the heart of the problems.

Throwing it back to the '70s, we have War - not the act, the band! This video from the heart of the Funk era of the mid-1970s gets its point across in a slightly silly way, but it's still an effective sensibility framed in a chummy sing-along. Check the little montage of characters hugging each other at the start, including a guy in KKK garb!

A surprisingly recent entry and a jolting change from the softer, soothing side of war protest, System of a Down pull no punches with their thrash-metal rage. This song was written for a far lesser-known conflict to the western world, the Nagorno-Karabakh war mostly between Turks and Armenians, actually between Azerbaijan and the Artsakh Republic. "Genocidal" is the key word in this title, because Armenians have been subject to just such a practice going back to WWI. System of a Down carved out half their career with war protest songs, which you'll be advised to check out.

We've been on a Pink Floyd revisit kick around here! This is one of those angry anti-war songs filled with Pink Floyd's typical melancholy. The lyrics are picturesque, visionary, and poetic, with epic instrument backing the sounds as ominous as a gas chamber. Then it comes out with the most swinging saxophone solo you've heard in a war song. Only Pink Floyd does it with this much style. Pink Floyd of course did a whole anti-war album and accompanying film called The Wall, which we might revisit on our next stop.

The one, the only crowd-pleaser, the song that melts all the cold hearts away! The German band Nena were a one-hit wonder on the state side, but this song was powerful enough to cross even the language barrier. The song lyrics are inspired by a Rolling Stones concert where they released balloons, and Nena guitarist Carlo Karges imagined them drifting over the Berlin Wall, still standing at the time. It's touching and sentimental, wistful and sad, and achingly beautiful all at once.

Speaking of the Berlin Wall, we wrote about the songs around the event of its coming down, on the 25th anniversary of its leveling. And doesn't that feel like lifetimes ago?

May peace and love be with you always, my precious cosmic blueberries! So fill your pockets with sunflower seeds and head for the Ukraine. You don't have to wait to get shot. You can just lie down on the spot and sprout.