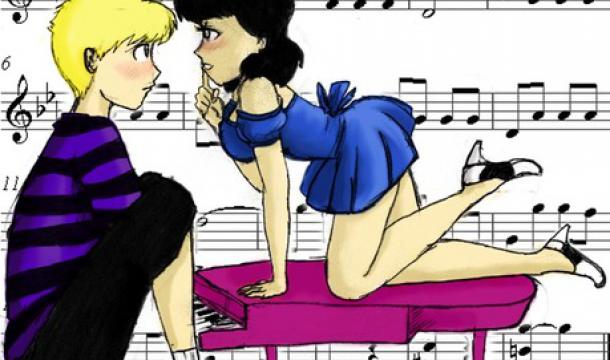 It's getting to be that time of year again. The leaves turn shades of Great Pumpkin and fall to the ground, and the seasonal holiday specials start their annual cycle on TV. Since most of you grew up watching these, you'll have no trouble recognizing this tune:

That track is "Linus and Lucy," which became one of the de facto theme songs of the animated Peanuts canon. Like most of the score of the Peanuts specials, it was composed by Vince Guaraldi. Guaraldi landed the gig to become the musical voice of the Peanuts gang when Lee Mendelson, the producer of a Peanuts documentary, heard a Guaraldi composition over the radio while riding in a taxi cab. Guaraldi jumped at the offer, and he subsequently produced the score for A Charlie Brown Christmas, first aired December 9, 1965. The next year he scored It's the Great Pumpkin, Charlie Brown, first aired October 27, 1966. And so his music became some of the most familiar to kids of all ages.

Vince Guaraldi came from a working-class background, with his uncle, Muzzy Marcellino, as his only related musical influence. He attended San Francisco State and served in the Korean war as an army cook - not the kind of resume one would expect for where he ended up. Wait, it's time for another clip, so this is the "Graveyard Theme" from It's the Great Pumpkin, Charlie Brown:

It seemed like there was no mood that Guaraldi couldn't express through his jazzy piano tunes. The Peanuts' character Schroeder became Guaraldi's avatar in the series. Whenever Schroeder is seen playing his toy piano, it was usually Guaraldi's arrangements that we heard, such as this mood-shifting medley:

That's a compilation of WWI tin-pan alley hits, "It's a Long Way to Tipperary," "There's a Long, Long Trail," "Pack Up Your Troubles in Your Old Kit-Bag," and "Roses of Picardy." Schroeder is passive-aggressively toying with Snoopy's mood, as he tended to do because Schroeder was a stereo-typical "geek" of his day: arrogant, socially-inept, intellectual, and obsessed with one thing to a monomaniacal degree. Vince Guaraldi was nothing like the character, but his music nevertheless became Schroeder's playing and so Guaraldi brought out the warm humor in every situation.

Guaraldi went on to compose soundtracks for multiple Peanuts' TV specials and even the feature-length film A Boy Named Charlie Brown, ending with the TV special It's Arbor Day, Charlie Brown. Vince Guaraldi tragically passed away in 1976 of a sudden heart attack at age 47. It was a tragedy that stunned everybody associated with the Peanuts' media franchise - Guaraldi's music had been the heart and soul of the Peanuts gang for so long that it was hard to imagine how it could go on without him. They never filled the void left by Guaraldi - later productions, such as the 1977 film Race for Your Life, Charlie Brown, might as well have had an empty chair at the banquet table for as much as Guaraldi was missed.

Since now you need a mood lightener, here's a parody of the dance styles of the gang:

And the quality of Peanuts specials continued to deteriorate over the recent years. We'll let Ten Zen Monkeys tell you about the five least-loved Charlie brown specials.

OK, let's lower the bar ever more. For those of you who are in the mood for an even more irreverent piss-take on the Peanuts canon, here's the very NSFW, but hilarious, "Bring Me the Head of Charlie Brown":