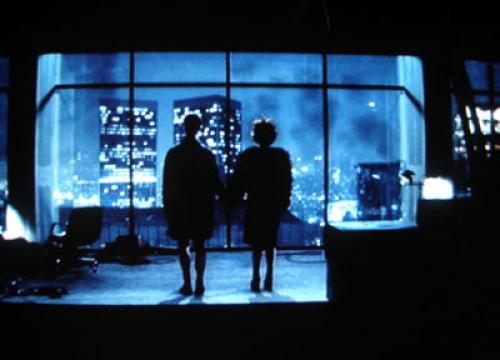 We continue from last time with the twelve songs which did the best job of ending a film. No matter whether the good guys won or all was lost to despair, or even if the universe ended in only slightly less chaos than it started, the final song in a film's soundtrack has to jibe perfectly with both the ending scene and the overall movie. So we pay tribute to these songs for being the best aural compliment to scrolling credits we've ever heard - and WARNING, we're talking about endings here, so these are spoilers for those who haven't seen the films yet.

This film took everyone by surprise. Matt Damon and Robin Williams both in serious roles, telling a rather gutsy and mature story, and then winding up with this very East-coast mood. Oh, and the amazing cinematography of a car winding along a highway, while we fly along behind it, because this film is the story of what the main character is leaving behind never to revisit again. But who can't identify, after they've made that transition from childhood to adulthood? So this song is a transition. And then it's punched up by "Afternoon Delight", motivated by little more than a joke Damon played early on. It's this last little magic trick where they make this the only time anybody's ever liked that song!

Here's another transition, and it's an even bigger one. From the underground (even literally the sewer in that one scene) to the bright, vanilla world of the normal people, as our hero marches triumphantly into the camera. "I'm going to be just like you!" he says, walking right out of the screen into the audience, which has just spent the last two hours in jaw-dropping contemplation of just how little he deserves that privilege. And yet, he's getting away with it. He wins by virtue of being the least rotten of the rotten characters. This song echoes its vocals and beats its club-dance tom-toms, not calling him back but saying a goodbye to Mark Renton as the scene behind him fades into a memory.

Breakfast Club - "Don't You (Forget About Me)"

There's not much to say here. Not only is this song the only logical choice for the film, but the film seems like it was invented just to complete the song. Highschool sweethearts look back on fond memories of their highjinx and angst before they go out to the world to be Generation X - this is the entire reason John Hughes, the Brat Pack, and Jim Kerr were put on this Earth.

Have we mentioned in the past fifteen seconds what an insane hyperburger this addled whirlwind of raving chaos is? It's a cartoon on speed and acid, nothing less. And every ten minutes when you're sitting through it, you're asking "How much more cynical can this GET?" and just in time every time, the movie goes "THIS much more cynical!" and you go "Oooooh! God! Now that's too extreme! But it can't get any worse, right, that's as far as you're going to go?" This song is the cherry on top of the cynicism sundae. A hymn to our animal nature, asking "I wonder what they meant when they said 'repent'?" while Mickey and Mallory go on to have kids and be just like us. Because we're animals. Grrrowwl!

Whoa, did somebody say cynical? This film, Stanley Kubrick's only attempt at straight comedy, has a lot in common with the above film, in that they're both stories of how the higher nature of society failed to reign in the lower animal impulses of mankind, and how we just have to live with those consequences whether we like it or not. But this film is also the epitome of black comedy, so they have this 1939 Vera Lynn crooner that marched soldiers off to war with little hope they'd be seen again, except sporting a harp and wings. Goodbye and good riddance, society!

And for the very best frission of final song and film ending...

It works on so many levels at the same time! The initial guitar and vocals come in loud before settling into a soothing drone, the dust clearing after the buildings blow up and "we all go back to zero". The winking romanticism as Marla Singer realizes that as complicated as she thought her man was before, there's whole worlds to him she still didn't know. The turn-of-the-century air of melancholy celebration as we realize that getting rid of the old system means having a new system in place ready to go, the 'step 2' on the checklist that all those kids in their Guy Fawkes' masks always seem to forget. And then the obvious, for a split personality at war with itself, it makes great sense to ask where your mind is - oh, but it's a metaphor for our ongoing cultural shift as well. Could any film have put a more perfect punctuation mark at the end of the 20th century? And while some songs arguably could have done this job, the competition was very narrow and this is one of the few songs that could have worked.