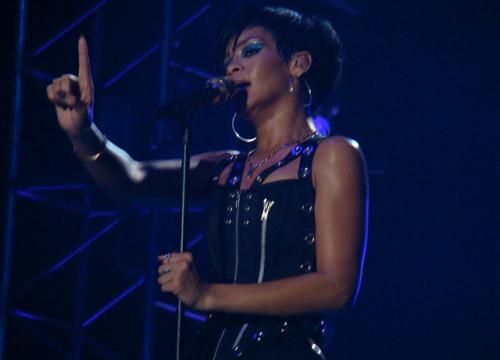 Why couldn't they try the same thing with other niche hobbies, like collecting stamps or doing yoga or building model railroads? At least we'd have some variety.

"S&M" by Rihanna, from her fifth studio album Loud, has been a top-10 hit around the world and a #1 on the US Billboard Hot 100. It kind of uses the trappings of kinky sex to express her disdain for critics, in a kind of tongue-in-cheek playful way - this is especially evident if you watch the video. The most specific she gets is lines like "Sticks and stones may break my bones, but chains and whips excite me" which was kind of a bumper sticker way back in the '70s.

Popular music has had a truckload of fascination with kinky sex that's gone on for decades. There's Duran Duran with "Girls on Film" and a video chock full of fetishes, Madonna with "Erotic" introducing herself as a Mistress, Lady Gaga's "Teeth" promising to show us love with her hands tied, Joan Jett's "Love is Pain," Judas Priest's "Pain and Pleasure," Depeche Mode's "Master and Servant," and enough more where that came from to fill a book. Oh, and let's not forget The Velvet Underground's "Venus in Furs" from 1967 and Tom Lehrer's "The Masochism Tango" which made fun of popular culture's obsession with S&m way back in 1959, before the current crop of pop stars was even born.

The whole fascination is based on a misunderstanding, of course. It stems from the idea that kinky sex is just another kind of decadent excess - "sex and drugs and rock and roll!" In fact, it's more of a lifestyle, and there are people who argue that they're born submissive or dominant (or sadistic or masochistic - the very word "sadomasochism" is an oxymoron) just as much as one can be born gay or straight. But let's not bog down the party with all this scholarly analysis! Wearing a ball gag makes you kinky, just like wearing a green mohawk makes you punk and wearing eye shadow makes you goth and owning a computer makes you a hacker and wearing a ten-gallon hat makes you a cowboy - even if you've never seen a live cow.

Anyway, if you're a parent and your kids start singing about chains and whips, don't be afraid that they're going to come home sporting collars and slave contracts at the local dungeon - this song has as much to do with real S&M as Devo's "Whip It."