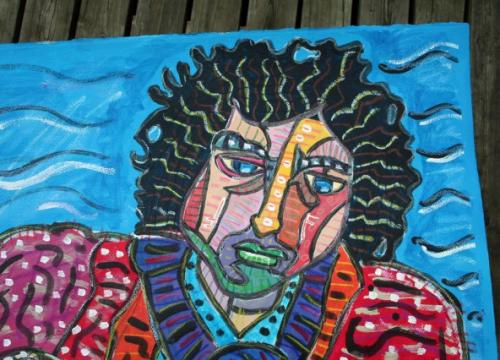 This blog post is about something happening here... but you don't know what it is. Do you, Mr. Jones?

Did you ever get the feeling that Bob Dylan is just plain fed up with sharing this planet with the rest of us zombies? Year by year, his answers to interview question get more and more enigmatic. He is increasingly loathe to even discuss the meanings of his work with us mere mortals, dismissing all of us munchkins with a caustic 'bah!' Even Nora Ephron got this treatment. You either get it or you don't.

What's to get about "Ballad of a Thin Man"? We're going to accept the challenge and dive right in.

In the first place, forget the question of "who is this song about?" The song is very definitely about anybody who wears a press pass and tries to report about music ("with your pencil in your hand"). Or any "Square", for that matter, who doesn't get the hippie movement, the folk/protest movement, or anyone who doesn't understand that they are "Mr. Jones". Just remember that Dylan is a poet and loads his lyrics with symbolism, just like he did in the much-more-penetrable "Maggie's Farm".

The story in "Ballad of a Thin Man" is told with a playful kind of Alice-in-Wonderland logic. The Square barges into the middle of the scene and has back-and-forth surreal conversations and interactions with a cast of freaks including a naked man, a geek, a sword swallower, and a one-eyed midget. This was in 1965, remember, when Baby-Boomers ruled the Earth, flower-power was reaching its peak, and everybody had a contented bellyful of Beat-generation literature.

Each of these characters is an allegoric stand-in for specific members of the young people's culture in the '60s - though who is what is kind of vague. The "somebody naked" might be then-current counter-culture theater performers, for instance - the stage show Hair was just months away. But it's a mistake to take anything literally. To do so would be to indulge in the same kind of linear thinking practiced by the same kind of squares that this song is slapping in the face. Whatever you do, don't try to knit the bone, the sword-swallower, and the one-eyed midget together into some homo-erotic theory. Reporters who didn't "get it" did that all the time, and those red herrings are just Dylan giving them enough rope to hang themselves.

Each of the freak characters from "The Scene" has their turn playfully mocking "Mr. Jones" for his inability to "Get It". You see, "Mr. Jones" deserves this mockery; he is only there to get a story because that's his job, and he's going to try to write it up later for a corporation that's going to use the story to sell magazines (the "lumberjacks", AKA "tree killers") and make money. His motivation is purely capitalistic, and so is at odds with the counterculture. The "freaks" are trying to tell him that he has no business here amongst their movement; their message is not for him and wouldn't be the same message if it were. Picture a modern Time Magazine reporter showing up at an Anonymous protest (or perhaps a Ron Paul rally), with all the kids in Guy Fawkes masks. He'd get the same treatment.

Pause and consider: Don't you feel this way about media all the time? When was the last time you saw a story in the news, of which you happened to have first-hand knowledge, and you groaned because they got it all wrong? We're all a little guilty of trying to understand the whole world in fifteen minutes before breakfast every morning, and so demand that rapid-fire reporters try to encapsulate that world in eleven minutes after commercials. But the shorter we talk, the more truth is left out.

Also, let's deflect a common misunderstanding that we're sure is going to come up in the comments: this song is NOT "elitist", "condescending", "patronizing", or "arrogant". The problem with trying to understand a scene you're not part of is that you have to start from the position of knowing nothing and trying to skip step two to go straight to instant grokking, because you don't have time (or won't take time) to do it right. But when we barge into the middle of a subculture and demand to be spoon-fed its shibboleths, we are both putting a tax on its members who never asked to be saddled with this burden, and are deliberately making a fool of ourselves by approaching the problem with the assumption that we're idiots seeking enlightenment from the Zen masters. No one can patronize you; you have to do it to yourself and then blame them.

If you come into the scene and say "This is art. Other people understand art. I will understand it, too. I'll just stay here and watch and listen and not be trouble for anybody.", then you'd be a lot farther towards understanding it already.

Dylan does not put "Mr. Jones" in the corner with a dunce cap on his head. "Mr. Jones" took that throne and crown himself; Dylan is just giving him what he expects.

So, this song is about media. And media includes this very blog post that you're reading now; we, too, have now committed the mistake of trying to understand a rainbow from a blind man's perspective by analyzing the frequencies of light. Of course, the fact that we know this means that we "get it". But the fact that we have just confidently stated that we "get it" means that we don't.

While we're on the subject, one "Ballad of the Thin Man" anecdote to share: In Al Kooper's mesmerizing autobiography Backstage Passes and Backstabbing Bastards, Kooper relates how Dylan, himself, and company took the stage during the now-famous (and infamous) 1965 Newport Folk Festival. We won't get into why the crowd was so unruly (that's a post for another day), but we can tell you that by Kooper's account, Dylan decided to play "Ballad of a Thin Man" to quiet the crowd. Hecklers continued to yell out during the intro, a quiet piano lead-in. So Dylan told them to just keep playing the intro in a loop until the crowd stopped. It took five minutes, but it worked! Then they could go ahead and play the song.

Dylan knows people better than they know themselves. And it may just be the case that several people in the midst of the scene that night were their own kinds of "Mr. Jones", with this song being sung just for them!