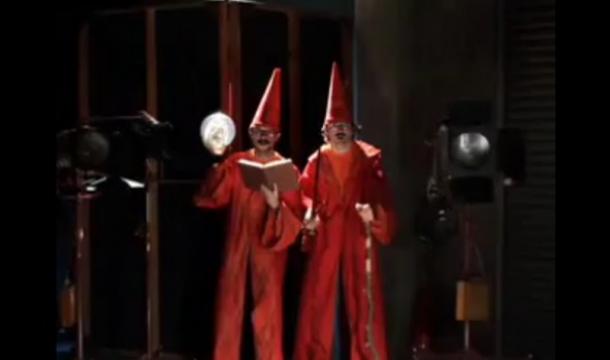 Math geeks, welcome to your favorite song! Thank you for temporarily laying aside your copy of Godel, Escher, Bach: An Eternal Golden Braid to visit us.

"Pi" is written and performed by Hard 'n' Phirm, an indie comedy/novelty pop duo composed of Chris Hardwick, Mike Phirman, and whomever else they can pull into the studio. The song was released on the album Horses and Grasses in 2005. "Pi" is about Pi, the mathematical constant which represents the ratio of a circle's diameter to its circumference. After "Radiohead," the group's parody tribute to the band of the same name, this song and its video is their next-greatest claim to fame. Take a moment to appreciate this batty bit of brilliance:

The song is also exactly 3 minutes and 14 seconds long... in case you never noticed that.

The song has a female duet sing a truncation of the number twice. The first time between the first and second verse, they sing it to exactly 63 decimal places. The second time, at the end, they start the number over again and just keep going past 160 digits until the song fades out, appropriately. Pause and consider what a tremendous mental effort it must be to recite an endless string of digits on beat and in tune without messing it up.

At the third verse, a rap bridge, we have a play on words which uses a mnemonic story to name the digits of Pi up to 3.14159265 - and then stops and goes through the digits backwards from there! Just like he said, "backwards and forwards."

The song "Pi" is famous on the Internet mostly for the video, directed by Keith Schofield, who has also done many videos for independent and alternative bands. The video is framed in the context of an educational song of the sort you would see on PBS (the retro '80s version, anyway), starting with kids introducing the concept of the number before Hardwick and Phirman appear in red wizard garb to lead us through the opening. The number itself is recited by a cardboard robot speaking in the female vocalists' voices. Then the rap bridge shows us the various digits being painted on different surfaces for the "forward" part, then the same sequence played backwards for the "backward" part. Genius! The video ending is hilarious.

Fans of the video game series Myst: Would you say that book prop in the music video might have been inspired by a "linking book" from the game? Same page layout, teleporting picture and all.

Because we love you math geeks so much (and also so our research team can show off), we'll close with some random Pi trivia:

Pi's first three digits are 3.14. Scientist Albert Einstein was born on March 14th ("Pi day", 3/14). Now go to the Wikipedia page for Albert Einstein and notice the page photo at the top right. What's that drawn on the chalkboard behind him?

Memorizing the digits of Pi, while impressive, is pretty useless past about 8 places or so. You only need 40 digits, tops, to compute a circle around the entire visible universe to the accuracy of a single atom. Eleven places (3.14159265358) is sufficient to build a Hula-hoop around the Earth.

In the King James Bible, I Kings chapter 7, along about verse 23, we get the measurements of the pool in the center of Solomon's temple as being a circle measuring ten cubits across and thirty cubits around. That would suggest that the value of Pi is exactly 3. It is mistakenly believed by some that fundamentalists would thus be bound to believe that Pi = 3. However, this is ancient times we're talking about here; Solomon's time was circa 970 to 931 BC. Archimedes didn't come along to give his geometric calculation approach for another 680 years. The concept of fractions existed in Solomon's time only as the fuzzy idea of approximated ratios and the like - and in any case measurements of the time would likely have been taken with a knotted rope and wooden pegs. It's not like Solomon had a laser-guided theodolite on a tripod or anything.

High-functioning autistic Daniel Tammet, of England, holds the European record for memorizing Pi to 22,514 digits, reciting it in five hours and nine minutes.

The 1998 Darren Aronofsky film Pi, a thriller about a mathematician slowly losing his sanity as he discovers a number that solves all the mysteries of the universe, contains some sloppy mathematical plot holes, one of which is documented at the ever-geeky Mind--Blown blog.

The first time a digital computer was used to calculate Pi was in 1949, on an ENIAC machine with celebrated computer scientist John von Neuman on the team. ENIAC pegged Pi to 2,037 digits, taking only 70 hours to do so.

You can easily remember Pi to eight decimal places by counting the letters in each word in the sentence "May I have a large container of coffee, madam?