The Red Songbook And Socialism In Music 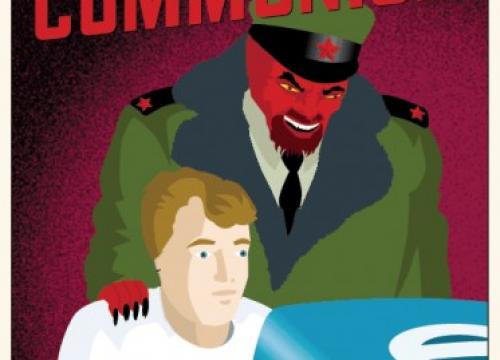 2011 has shaped up to be a stormy, turbulent year in politics around the world. Whether it's the Middle-East turmoil about Mubarak, the Libyan angst over Gaddafi, or the US haggling over union rights in Wisconsin earlier in the year and the federal budget crisis more recently (plus the rise of the Tea Party), it's hard to get away from political news and the people riled up over it this year.

So we'd like to join in the spirit of things by examining a quirky subcategory of political songs. Please note: We're not doing this to support or put down any particular political ideology. This blog post is no different from any other post on this site, just writing about songs and illuminating the interpretations behind them.

The Little Red Songbook was published by a hardy band of upstarts in Spokane, Washington, in 1909. The songs are all in praise of Socialism and its little cousin Communism. You'll vaguely recognize some of the names that went into it: Joe Hill, Ralph Chaplin, and T-Bone Slim. The book has since been nurtured along by IWW (Industrial Workers of the World). If you want your own digital copy, a free PDF download is only a Google away. The IWW subtitles every edition with the sassy mission statement: "To fan the flames of discontent". Right there, you're starting to see why we can't resist blogging this: Little Red songs have a wonderful blend of bottled rage and non-threatening pacifism, laced with an almost self-mocking tongue-in-cheek humor. We're here to fan some flames (whoa, that sounds dangerous!) of discontent (oh, is that all? carry on).

Take "Solidarity Forever", certainly the most famous of this obscure genre. It's sung to the tune of "John Brown's Body" and here's some of the lyrics:

It is we who plowed the prairies; built the cities where they trade,

Dug the mines and built the workshops; endless miles of railroad laid.

Now we stand, outcast and starving, 'mid the wonders we have made;

But the Union makes us strong.

Wow, who below the level of CEO couldn't identify? And in the age when computing technology has replaced so many jobs, while we now have an economic crisis and rising unemployment, it seems there's plenty of discontent to be flamed there. At the same time, you have to ask "If the union makes you strong, then why do you have these problems?" But now check out the more modern lyrics, added by unionizing females in the 1970s:

It is we who wash dishes, scrub the floors and clean the dirt,

Feed the kids and send them off to school - and then we go to work,

Where we work for half men's wages for a boss who likes to flirt.

But the union makes us strong!

Geez, now we're expecting that there was a cut scene from Nine to Five with Dolly Parton singing it. By the way, we highly recommend the Pete Seeger recording of this on the album If I Had a Hammer: Songs of Hope and Struggle, which sounds just like a tiny ragtag band of downtrodden peasants singing it around a campfire, with all the plucky, courageous charm in the world.

But it gets better: Forget Frank Zappa, forget Weird Al Yankovic, another song in The Little Red Songbook is the most vicious, scathing satire ever written. Brace yourself for "Christians at War", sung to the tune of "Onward, Christian Soldiers" a stanza of which goes:

Folks who do not speak your tongue, deserve the curse of God.

Smash the doors of every home, pretty maidens seize;

Use your might and sacred right to treat them as you please.

Yeah, makes Stephen Colbert look like a peewee-league amateur, doesn't it? Heck, Bill Maher would not have the nerve to recite the entire lyrics on the air, not for all the weed in Jamaica. No, we have to conclude that Jello Biafra traveled back in time incognito to write this. Somehow.

Ah, but now the gentle, lopsided, tear-streaked humor of Joe Hill. An excerpt from "Scissor Bill":

You may ramble 'round the country anywhere you will,

He's found upon the desert, he is on the hill,

He's found in every mining camp and lumber mill.

He looks just like a human, he can eat and walk,

But you will find he isn't, when he starts to talk.

He'll say, "This is my country," with an honest face,

While all the cops they chase him out of every place.

Joe Hill, incidentally, came to a tragic end and there is much more to learn about him, but let's move along.

Just for balance, we should point out that outside of The Little Red Songbook, things get a little darker for the Socialist music sphere. Take Chinese examples. Like the utterly dry "Socialism is Good", a popular Chinese folk song circa 1950 during the Chinese Cultural Revolution. Excerpt, translated to English:

The people protect the socialist system.

The power of people is invincible, the resistance of reactionary cliques is destined to fail.

Now, maybe it's the translation, but we can't possibly see how these lyrics come off as anything but propaganda-ish. We're all aware of the news reports of what goes on in China, and the international concern over human rights there. Suddenly, Socialism doesn't sound so friendly when it's rammed down your throat. Boy, does that kill the mood! Of course, the Chinese interpretation of the idea (actually Communism) is radically different from the other flavors of Socialism in the world, just like America and Canada can both be democracies but still have radically different political cultures.

Oh, and Chinese Socialism doesn't sound pacifist either, such as with "The Guerrillas' Song", circa 1930s-1940s (Second Sino-Japanese War). Check it:

We are all sharpshooters,

Each bullet takes out an enemy.

We are all soldiers with wings,

Well, there you go. I guess your soldiers can't march to the Mickey Mouse Club theme, right?

And for those of you who cringed through this post, you should know that we could have done much worse than this in the category of political songs. For instance, would you believe that Wikipedia has a whole list of... Nazi songs?