Kenneth Anger Is a Link Between Led Zeppelin and Charles Manson 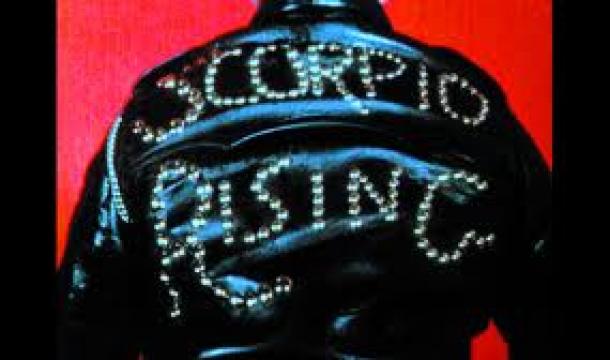 We've been meaning to cover the musical aspects of a couple of short films of underground film-maker Kenneth Anger. Anger, currently age 86 living in Santa Monica, California, has hoarded his secrets long enough. And his last name is very apt. But frankly, we just never can bring ourselves to get around to his work, because he's just too damned weird.

Now when we say "weird"... We've previously blogged about the askew universe of Sun Ra, but even though he was weird, he makes sense. Sun Ra was crazy, but consistently crazy.

Kenneth Anger, however, chopped out two Hollywood Babylon books, made a bunch of experimental films, rolled around to his hedonistic heart's content in the drug scene, palled it up with Church of Satan founder Anton LaVey (who named Anger as godfather to his own daughter), threw paint at Andy Warhol's house, ran his own obituary in a 1967 issue of the Village Voice, came "back from the dead" declaring that he'd destroyed all his old work, retired, came back... you get the idea. You can't take his word for the air it isn't printed on.

Depending on how much of that you just watched, you should realize that Mr. Anger has a bit of the fondness for the boys. Specifically biker boys, showing endless drooling pans across luscious stud-muffin Bruce Byron getting dressed... and dressed... and DRESSED in hunky biker leather duds and wrenching on his iron horse. If you weren't gay before you watched this, you sure as hell are now.

But what makes it notable is the all-star soundtrack, whose copyright would set lawyers to bodily combust were it attempted today: Ricky Nelson, Peggy March, The Angels, Bobby Vinton, Elvis Presley, Ray Charles, Martha Reeves and the Vandellas, The Crystals, Claudine Clark, Kris Jensen, Gene McDaniels, The Surfaris, and The Shangri-Las. You can pick up your jaw now.

Oh, but we have miles to go! We did say something about Led Zeppelin and Charles Manson back there. Getting to our central piece, here's Lucifer Rising (1980):

Credit: "Music by Bobby Beausoleil" - That's aka "Cupid," part of the Manson gang, currently serving a life sentence for Murder One in San Quentin. Like Manson himself, Beausoleil was an aspiring musician, and he was contracted by Anger to do the soundtrack for this short film - a task he was to honor from within prison walls. In between arrest and completion, Anger tried to get Jimmy Page - who showed up to work - but later had disagreements with Anger (by all reports, Kenneth Anger was not an easy guy to get along with). So Beausoleil ended up doing the work anyway. Page still appears in this film (and lately his original soundtrack was released in 2012), as does Beausoleil, as does Chris Jagger (brother to Rolling Stones' Mick Jagger), and Stones' protege, British singer Marianne Faithfull.

The film itself? A mish-mosh of Satanic, Egyptian, Abrahamic, Druidic (or whoever built henge), and New Age themes. Apparently Lucifer is so old and established that he's invoked by mixing all the old religions. No dialog, as with all Anger's projects. This leaves us free to meditate upon curiosities like Osiris and Isis saluting each other with their staves over and over again for five minutes. Remarkably, this was all actually filmed on location - they really went to England for the henge shots (not Stonehenge, but Avebury), and Giza and Luxor, Egypt, for the pyramid and sphinx shots, and so on. The volcano is stock footage from Iceland.

Now, let's make it clear that we aren't knocking this effort. It is definitely art, and it is emotionally charged, timeless, haunting art. Yes, the soundtrack is half the experience here, capturing the images in all their passion. It's loopy and crazy, too, but sometimes it takes a madman (in this case, mad people all around) to show us and play for us what no one else can.

Further pursuit of Kenneth Anger's angry little universe may be chased in the dungeons of UBUWEB.

By the way, the special effects work is courtesy of none other than Wally Veevers, who also did special effects on Kubrick's 2001: A Space Odyssey. But "Kenneth Anger Is a Link Between The Rolling Stones, Led Zeppelin, Charles Manson, and Stanley Kubrick" was too long a title.