"Put Another Dime In The WHAT?" - Songs That Mention Obsolete Technology - part 1 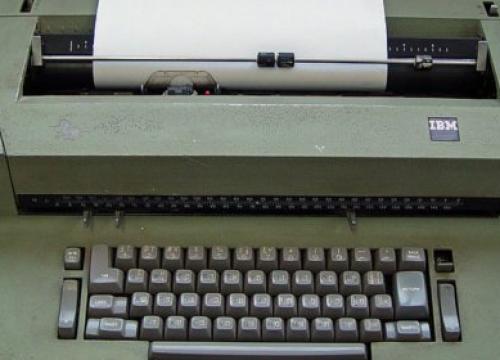 One of the hardest factors for interpreting song lyrics is when the song doesn't age well. This is a hard problem to avoid; how long can you talk about what's going on around you right now without eventually mentioning something that will be a completely outdated concept decades from now? The marching-on of progress makes it necessary for any song researcher to be part historian.

So gather round, grandkids, and let's explain some of these dag-nabbed old-fashioned expressions to you whippersnappers. But we're going to leave off all references to physical music media - records, 8-track tapes, cassettes, CDs, and so on - because then we'd be here all day!

This 1966 single, backed by the B-side "Rain", was McCartney's response to a challenge to write a hit single that wasn't a love song. It also includes background sound effects that seem to be an actual manual typewriter - every source we can pin down tells us that Ringo somehow imitated the sound of a typewriter with his drum kit. At about this time, manual typewriters would have been in vogue - the lineage goes manual typewriter - electric typewriter - word processor - desktop computer - laptop. And that's about the line, since most of us don't compose office documents on our smartphones.

Before the Internet, our best way to easily socialize with people from all over was telephone party lines. It was just a kind of informal conference call where anybody could dial the number and join in. If you think your phone bill is high now, you should have seen it after spending a night yakking on one of these babies! But even though we've moved on to texting and Internet chat, we can still identify with the lines: "Who's on the other end? Is she big, is she small? Is she a she at all?"

Before the days of automatic drip coffee makers (and steaming espresso and French press and all the other gizmos coffee snobs natter about), percolators were about the only way to get a decent cup of joe. Coffee grounds go in the top, water in the bottom, set it on the stove, and eventually the boiling water goes up through the coffee grounds and down into the pot. You probably haven't seen one later than the 1970s.

For once, we are completely justified in telling you young'uns "you don't know what you're missing!" Nowadays you pay the better part of a Franklin for a few hundred channels and what do you get? A pile of garbage! With commercials, infomercials, and lousy reality trash shows! What if we told you that we used to get more channels than that for FREE, with better quality programming? At least in heavily populated urban areas or "UHF islands" we did. UHF channels tended to be indie, specialized, and obscure. Think "the blogosphere of television". But they were also a goldmine of quirky, original, risk-taking programming that you simply do not see today. One might have some nutball street preacher delivering fire-and-brimstone rants, another might be showing a complete marathon of the entire works of Alfred Hitchcock, another might be rerunning Rhoda and Gidget, another might be showing an educational series about how to oil-paint. And not a single Kardasian in the lot!

From R.E.M.'s 1994 album Monster, this is a pretty obscure feature that came and went in the space of a few years. It meant that you punched in "* 69" and could automatically call back the last number that called you. These features were collectively called "vertical service codes" and Wikipedia has a whole list of them. You could have called yourself quite the phone-hacker (you don't know what a "phreaker" is, do you?) if you mastered the entire list. Including the unlisted secret ones for CIA-use only.

In-between the time of landline telephones and modern mobile phones, you had these battery-operated plastic boxes about half the size of a pack of playing cards which you would clip to your belt or purse. When somebody dialed the pager's number, it buzzed or beeped or lit up and displayed a number (and maybe a code) on a tiny LED screen. That's it; you'd have to go find an actual phone to call the number back. Would you believe that people paid money for this?